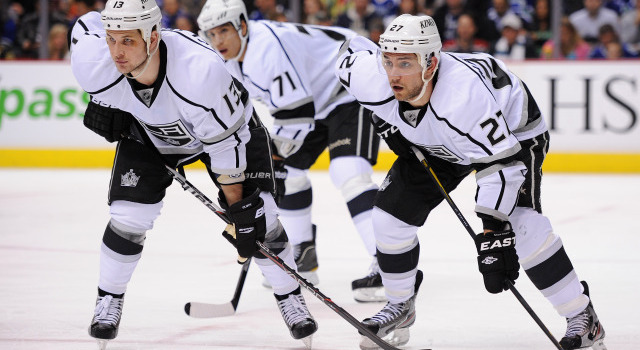 The Kings have won four straight games, so the urgency of the situation isn’t as pronounced. But if you add up the statistics between the forwards expected to skate tonight on the so-called third and fourth lines, you’ll have a combined 41 games played this season, one Nick Shore goal and two Tanner Pearson assists. No points have been generated to this point by the Clifford-Andreoff-Nolan line.

Again, the Kings have a winning record – and Darryl Sutter did note that “Shore and Lewis have been top players for us” during today’s media availability due to their strong checking and play in zones where points are scarce. Also, the lack of production has team-wide roots, as Los Angeles’ 1.86 goals per game ranks 27th in the league.

But when asked before the start of the season whether Shore was capable of holding down a third line center role, Sutter noted that the names occupying the “boxes” in the lineup didn’t matter as much as the points generated by those boxes.

“Last year, that box did not fill that number,” he said of the lack of consistent production generated by the third line. “It produced at the box-down number.”

The players are aware of their need to generate more depth scoring.

“I think as a team we’re playing well and we’re getting our wins. But at the same time, to continue winning, I think we need to produce more,” Kyle Clifford said. “I think we need to make it harder on their D-men. We need to be more assertive and firmer in our game. You look at our chances for, it’s not a great number. It’s not necessarily about scoring and producing in that sense, but I think from an energy and role standpoint there’s definitely some production that needs to be added to our game.”

The need to be “assertive and firmer” correlates to a Darryl Sutter observation when asked this morning about how to “cultivate” scoring from forwards who are yet to find the scoresheet.

“‘Cultivate,’ for a farmer, means ‘work,’” he explained. “So, if you’re talking about anybody [other than Lewis and Shore], cultivate is work.”

The defense has performed admirably over the four-game winning streak as several younger players have admirably stepped into wider roles, and the club has allowed a total of three goals over its last four games. Though the blue line is yet to hit pay dirt, it’s probably just a matter of time before that happens.

“I think we just have to stick to what we were doing,” Alec Martinez said. “I think really up until last game, we were leading the league in shots coming from the blue line. So I think it’s important that we just have to keep doing that and keep getting shots through. It’s really hard to get shots through these days with all the teams really focusing on collapsing down low and blocking shots. Maybe I’d be a little concerned if we weren’t getting opportunities or getting the looks. But that said, we’ve got to start burying the puck here.”

As for the depth scorers, they’ve been contributing in other ways. Tanner Pearson has become a part of the regular penalty kill rotation, and Clifford has been earning the odd shorthanded shift as he has grown and accepted a broader role with the club.

“I think our penalty kill has been really good so far,” Clifford said of a unit that ranks sixth in the league with an 88.6% success rate. “We’ve got a lot of veteran penalty killers and that’s something we take a lot of pride in. It’s a work mentality and it’s not easy. We pour everything into it and it’s going to help us win.”

Kyle Clifford, on his line’s efforts to establish an identity:
Yeah, absolutely. I think for our line to be productive, it’s about establishing identity. We’re all big, strong, fast guys that can play hockey. We’ve got to bring that. All three of us have to bring that. We’ve got to be on the same page and that’s in our preparation, that’s getting ready for games and being ready to play and ready to win.

Clifford, on his line’s performance against Colorado last Sunday:
That’s definitely where we want our game to be. As of right now, that’s where we set the benchmark for the season. We want to be at that level or greater. I think with that game, we just kept it simple. We played to our strengths and played to our game and it makes us valuable hockey players.

Clifford, on his penalty kill shift with Andy Andreoff in San Jose:
Obviously I think it’s something that we can add to our game. We’ve got to be ready to go when our name is called. We’ve got to understand the system. Like I said, there’s a work part of it. I think with Andy and I, we’re always willing to do the work and it’s just a matter of working the right way.