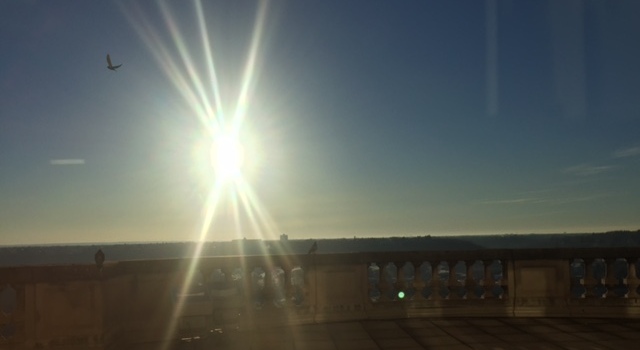 Due to a quirk in the schedule, the Kings won’t play consecutive games in the same city until November 5-7, when they host Columbus and Florida. Though there have been gaps between some of the home games, this does almost give off a feel of a Los Angeles – San Jose – Los Angeles – Edmonton – Winnipeg – Los Angeles – Chicago – St. Louis road trip.

There was a historic moment when we left LAX yesterday. This usually only happens at the White House, but the paths of the two Insiders crossed, and that’s always a good thing.

It’s always kind of cool when we’re around the Galaxy, and hey, there’s Robbie Keane and, now, Giovani dos Santos. If you’re a Galaxy fan and you’re not following Adam Serrano, you should be. Here, Adam explains what the Galaxy have to do to earn the Western Conference’s second seed when they visit Sporting KC tonight.

As their plane was bound for barbecue country, ours descended over Oil Country. Because of the time of day and the direction our aircraft was facing, the sun didn’t really allow for any clear view of the terrain below.

OK, Insiders, it’s time for a note or two on how how the aesthetics and some of LAKI’s skeleton will change when the site’s update is completed. (The redesign is due to be finalized and implemented tomorrow.) As noted previously, there will be tabs at the top of the home page that will allow easy navigation between LA Kings Insider and Ontario Reign Insider. Insider Tweets will be compressed, new skins will be installed (good bye, Kopi and Dewey; hello Carts and Gabby), and you’ll be able to click on individual links for easy access to all stories written about a particular player. Also, there will be a partnership between LA Kings Insider and SolarCity, a company that designs, finances and installs solar power systems. The implementation of the SolarCity presence on the site will not be intrusive, nor will it affect the constitution of LAKI. There will not be SolarCity skins – only a small “presented by” sub-banner. The main reason I gave the OK to go ahead with the partnership is because it provides capital, some of which will be used to improve the site and widen the reach of the Ontario Reign Insider platform. If you have any questions or concerns, you are always welcome to email me at jonnyrosen-at-gmail, and I’ll do my best to respond as quickly as possible.

That’s it for now; the bus for Rexall Place leaves in under half an hour, so it’s time to get a move on. There’s lots more to come on a busy Sunday in Edmonton. As always, thank you for reading, Insiders.