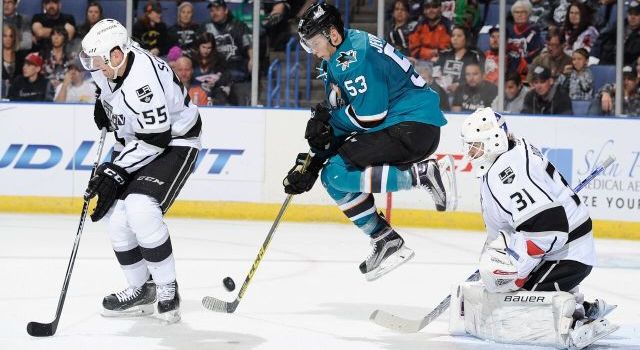 I think it was real good considering we played last night and we had a team that had a long night of travel … I think we played a good game that we needed to play. We really didn’t give them a whole lot of life and took away their ice. They had a few opportunities, Buds was real good when he needed to be, but I’m liking the fact that we’re keeping the shots against under 30.

I’d like to think that we’re never gonna do that again but you’re going to have this recorded and it’s gonna come back to haunt me. … We addressed it and they knew they needed to be better and they were.

There’s two of them, so I chose Buds. I don’t know if there’s any thinking involved. He’s played pretty well so, turned out pretty good though.

Stothers, on Mersch so far this season:

I was very fortunate to have him all last year. I know exactly what he can do. The way the second period ended if you think back to the two blocked shots, we had to kill a penalty and we actually did but we couldn’t get out of our zone. Part of that Mersch and Dowd had been out killing penalties and they were pretty tired and they looked at me and said, hey, Stuts I’m ready to go again. And that’s the type of guys you want – like Dowd and Mersch. Merschy has just been phenomenal. Sacrifices himself for the betterment of the team and makes two huge plays for us to get out of the period and regroup for the start of the third. Nothing really surprises me with him. His contributions both offensively and defensively. He’s a guy that when you look at the game and maybe making some film for the rest of the team to watch. He’s in quite a few of the highlights and for all the right reasons. As a coach you’re not supposed to have favorites but I enjoy watching Michael Mersch play. If I was a fan I’d love to come to the rink and watch him play.

Adrian Kempe, on getting a better start:

We’ve had some good starts before the last game but after the start yesterday we felt that we had go out there and play stronger from the start.

Michael Mersch, on his two blocked shots at the end of the second:

The last three minutes of the period is big because you never want to lose momentum or give up a goal and when you’re able to do that for your team, whoever it is blocking the shots, it gets everybody (thinking) we’re getting this done tonight, we’re doing the right things and when you’re able to do it you feel like you’re helping the team as well. … I made the first block and then it went right back to him and was able to get a leg on the second one. That type of stuff wins hockey games and we have a lot of guys doing it on our team no matter which night it is.

Peter Budaj, on the “easy night”:

I don’t think there are any easy nights in this league. I think it was a great game, great execution from our team. … We played really good defensively so in games like that you just try to focus on the next shot and we have faith in the team that they’re gonna score goals and they did so it’s a very good feeling.

Budaj, on picking up so many shutouts so quickly:

Not even thinking about that before the season, just trying to kind of bounce back after the tough last year that I had but it’s a great atmosphere with the team. We have a great group of guys, great coaching staff, they challenge the boys really well and the boys perform for them and it’s shown today and starting 5-0 in this league is pretty impressive so far.

Andrew Crescenzi, on his goal:

It was just a faceoff play we ran and Les had a good shot on net and the puck was just sitting there and I was lucky enough and get the first one off my back.

Crescenzi, on his parents (Bev and Bruno) being at the game from Toronto:

It’s unbelievable, they usually try to make it out to every opening weekend of the season and to have them here and let them watch me play live is nice because I’m so far away from home and I’m glad I could score a goal for them.