How to make quality reads and decisions on odd-man rushes 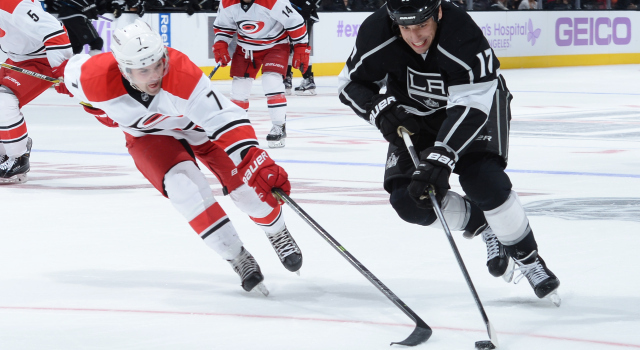 If you were one of the 27,721 fans who sold out a pair of buildings to take in either the Los Angeles Kings’ 3-0 win over the Carolina Hurricanes or the Ontario Reign’s thrilling 5-4 comeback over the Bakersfield Condors, impressive displays of individual skill were on hand in both downtown Los Angeles and the Inland Empire – whether in Anze Kopitar’s backhander past Cam Ward, or Kevin Gravel’s missile from the point past Ben Scrivens that handed the lead to Ontario for good.

And there were also tightly coordinated examples of skill shared between pairs and trios that paid dividends. Most notably, Milan Lucic and Tyler Toffoli executed a crisp give-and-go that led to a Lucic-to-Toffoli cross-crease chance that served as the third goal scored off an odd-man rush over a two-game stretch (see also: Toffoli electing to shoot on a 3-on-2 and deking around Martin Jones, and Carter electing to shoot on a two-on-one and beating his former teammate between the wickets). It’s probably safe to say that the Carter line is in a groove right now.

Given the recent rush chances, and the well-executed two-on-one last night, I spoke with Milan Lucic today about the thought process behind entering the zone with the puck on an odd-man rush. That decision making is akin to a computer instantly sifting through data, as so many variables and so many reads are made in such a short period of time. It’s all very interesting.

Milan Lucic, on the quick reads made on a two-on-one rush:
I think the first thing you’re looking to see is whether you’re on your forehand or your backhand. If you’re with a guy who’s on his on-wing or off-wing, and then you’re checking to see how the D-man is playing it. Whether he’s giving you the shot or more of a pass, or like in last night’s situation, he was just trying to completely take me out of it so it’s giving me the pass. So I think it’s just three things – you’re reading the D-man, whether he’s giving you shot, pass, whether you’re on-wing or off-wing, whether you have a guy with your on-wing or off-wing and then you’re reading the goalie. Those are basically the three quick reads that you have in minimal time to make.

Lucic, on whether there is a “point of no return” when deciding to shoot or pass:
Probably the top of the circles – I’d probably say around there is where the two of you have made your decision by. It’s your point of no return. If you’re still thinking by that point, that’s when usually you over think it and waste an opportunity.

Lucic, on how he can create the best possible shot if he’s leading the rush:
It’s all split-second things. It’s where you have the puck and your body movement and you can fake pass and then shoot. Tyler’s goal in San Jose, [it’s an] odd-man rush and he decides to deke the way that he does. That’s all split-second things that you’re thinking, but it’s all how you’re positioning yourself, reading what you have and all that type of stuff. I don’t really know how else to explain it. It’s just things that come natural doing it over and over and over again. You just go with what you feel is the best at the time. It’s a high percentage play and you want to do whatever you can to make sure you execute on it when you do get a two-on-one.

Lucic, on what has led to the recent odd-man rushes:
I think our breakouts have been a lot better. Usually when you have good defense and you’re checking well, that’ll lead to odd-man rushes and offensive opportunities. So I think our D have done a better job of breaking the puck out and, for us as forwards, we’ve done a better job of getting back and being able to get going the other way. So it’s a combination of those things.

Lucic, on how his thinking changes if he’s leading a three-on-two rush:
Usually you want the middle drive and usually you want to isolate one D to make it a two-on-one. And if you can beat that guy and the guy gets the puck, you isolate the other D. You try to make it two two-on-ones. It’s all reading and reacting as well. It’s so fast. You’ve just got to trust your instincts and have a good feeling of where guys are going to be and those types of things. I think that’s a big part of the chemistry as well, is what comes to play in the rushes more than anything. So far we’ve been able to execute them the last couple games and hopefully we can keep creating more odd-man opportunities and creating more goal scoring chances for ourselves.