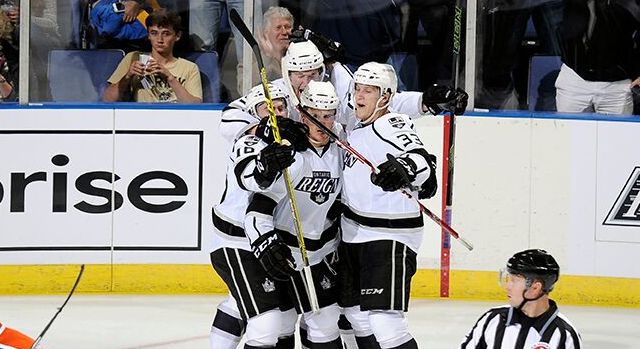 The Reign scored four unanswered goals in a 2 minute, 42-second span at the end of the second period and went on to win their AHL home opener 5-4 on Friday night at Citizens Business Bank Arena. Kevin Gravel’s high shot from the point with 2:50 left allowed the Reign to erase a 3-0 deficit.

Head coach Mike Stothers on the comeback: “Anytime you have a situation like that, you know you’ve got some good leaders and you’ve got some guys in there that don’t like losing, they don’t like being behind, and quite frankly they’re very honest in their opinion or their evaluation of their performance. And you really don’t have to say a whole lot to some of those guys. They know that they can be better and they’re not afraid to hold others in the room accountable. I think we have a great leadership core are that’s what we rely on.”

–Kris Newbury – Not only was Newbury on the ice for three of five Reign goals, his tally made it 3-2, just six seconds after Michael Mersch ended the Reign’s drought. He battled through the game after taking a shot off his left foot late in the first period.

–Valentin Zykov – Zykov led the way with two goals, his first tying the game at 3-3, the beneficiary of a nice move in front of the net by Andrew Crescenzi. Zykov’s goal in the third gave the Reign the cushion they would eventually need. Alone in the slot he wasted no time in beating Bakersfield goalie Ben Scrivens. Zykov picked up right where he left off in Manitoba, where he scored his first goal of his pro career in a 1-0 OT win. All good signs for the 20-year-old.

–Peter Budaj – The Reign goalie made two huge point-blank saves in the third period, one on Bogdan Yakimov before Zykov made it 5-3, and another on Jujhar Khaira after Zykov’s goal. Budaj, who finished with 25 saves, made the stops when he had to and really had little help during Bakersfield’s run to a 3-0 lead. His record improves to 4-0-0-0.

–Michael Mersch’s goal: Mersch’s solo show goal, picking up his own rebound off a power wraparound attempt finally got the Reign on the board and broke the dull and lull in the building. It was the kind of goal we saw from him in the preseason with the Kings.

This and that off-ice

Los Angeles Kings Hall of Fame left winger Luc Robitaille dropped the opening puck. … The Calder Cup was on display at center ice before the game and the Monarchs’ championship banner was unveiled.

San Jose is in town Saturday night as the Reign wrap up their weekend homestand with a 6 p.m. puck drop. The Barracuda were shut out Friday night 3-0 at home against San Diego.