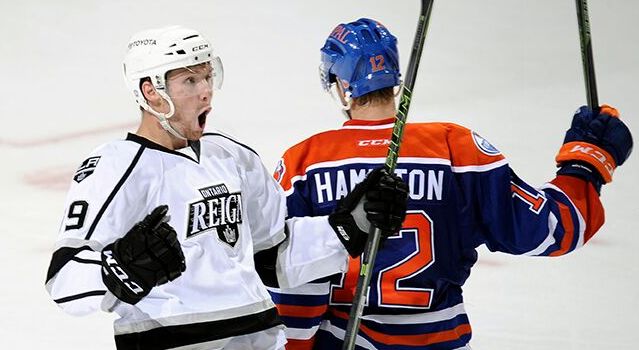 Mike Stothers, on the comeback:

We had to start moving our feet first and foremost. It’s a strange game because you can rant and rave or you can just look at it as a positive and say listen, we’ve still got plenty of time. And knowing our team the way we do we’ve got some firepower, we’ve been in situations before where we don’t let things affect us adversely and we just kept plugging away. We just wanted to get one and we did and things started to turn in our favor.

Stothers, on what led to the turnaround:

Mike Mersch gets the ball rolling with what he does best, down low, hanging onto pucks, taking it to the net. Scores from in tight, he’s a tough man to contain.

Stothers, on the end of the second period:

The intermission came at a bad time as far as I’m concerned because it would have been nice to keep that momentum going, then you get into a situation where they get the chance to regroup.

Stothers, on the home opener and banner raising:

I’m just glad it’s finally over to be honest with you. We waited a long time, October 23rd before we finally had our home opener. We addressed the banner and I hope we never bring it up again. That was last, this is this year. It’s a whole different team. … Right now we’re a new team in a new city and we’re forging ahead with what we hope is a good and positive new identity.

Stothers, on what he took away from the game:

Anytime you have a situation like that, you know you’ve got some good leaders and you’ve got some guys in there that don’t like losing, they don’t like being behind, and quite frankly they’re very honest in their opinion or their evaluation of their performance. And you really don’t have to say a whole lot to some of those guys. They know that they can be better and they’re not afraid to hold others in the room accountable. I think we have a great leadership core are that’s what we rely on.

Michael Mersch, on what was said between the first and second periods:

We just told each other we were gonna have to be able to do it the right way, we weren’t gonna cheat. Get shots on net, get pucks in, that’s what we did the first three games and we had success. Mindset didn’t really change and I think that’s what makes us successful.

Mersch, on the comeback:

Mersch, on the restless crowd early in the game:

We were laughing about it. It was our first game with us be 3-0 and then we’re getting booed. We thought it was funny. We took it as it was. We kind of deserved it, we were down 3-0, but I was just glad we were able to come back and get a couple goals and win for them.

Mersch, on his goal:

I was able to get behind the net and get a shot on goal. I hadn’t been shooting the puck enough in the first period. When you get those shots it kind of causes chaos and I don’t know whose skate it hit off of but I was fortunate enough to have it bounce off my stick.

Kris Newbury, on his left foot after taking a shot late in the first:

It’s a little sore, expected after a game like that, but just try to take care of it tonight and tomorrow morning and be ready to go.

Newbury, on the game turning around:

After the first goal obviously there’s some momentum, I know the fans were a little disgruntled at our effort there. Obviously we know it wasn’t our best.
But after first goal we wanted to just keep applying pressure and you never know in the game of hockey what can happen and we were able to get another quick one and build off that.

Newbury, on the pace of the rally:

That was definitely fast, all those goals that went in the net so we’ve got to try to build off that, get some confidence.

Valentin Zykov, on comebacks in his career:

When I was playing in Quebec League of course, we had a couple games like that. It’s always fun to win like that.