Preparing for the Hurricanes, Justin Faulk with Trevor Lewis 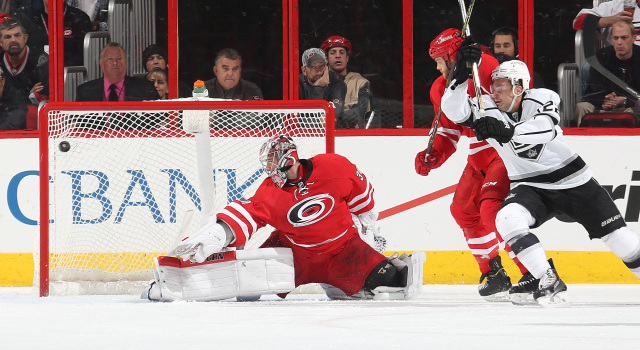 Trevor Lewis, as you may remember, was an alternate captain on the United States’ bronze-medal winning team at the World Championship this past summer. While Jack Eichel was one of the “sexier” names on the team because the event’s timing came a month and a half in advance of the NHL Draft, one particular teammate who will be in uniform tonight that Lewis spoke very highly of is Justin Faulk, the 23-year-old defenseman who leads the Carolina Hurricanes and ranks eighth in the NHL with an average ice time of 25:47 per night.

Darryl Sutter shared some praise earlier today for the Hurricanes’ mobile defense, and said in particular that Faulk has “really taken a step up.”

“You can see he’s a top player in terms of his overall game and not being such a high-risk player,” Sutter said.

The numbers would agree; Faulk, who totaled three assists and a plus-five rating in 10 games at the World Championship, has followed up his 15-goal, 49-point season last year by posting two goals, four points and an even rating through six games this season. His even-water mark is even more impressive considering the ice time he sees against the league’s top players.

“I actually sat next to him the whole flight over to Europe, so I got to know him quite a bit there,” Lewis said. “He’s a good guy, kind of a quiet guy but he cracks jokes and stuff. He’s a good guy. On the ice, he’s a really good player. He’s really composed and really good in his D-zone. In the offensive zone, he knows how to get shots through and look for guys.”

As for the Hurricanes, they’re sneakily a strong possession team by virtue of their ability to suppress shots. Their 229 shot attempts against in five-on-five play are tied for the third-fewest in the league, and they’re well above neutral in raw Corsi. Last season, they ranked ninth in the league with a 52.4% Corsi-for, and all eight teams above them – except for the Kings, who led the league in many possession metrics – made the playoffs.

“I think we have to focus on our checking and our D-zone, breaking their plays up and getting the puck out quick,” Lewis said of playing against other strong possession teams. “If we’re out of our zone quick, you’ve got a lot more energy to play in the offensive zone. So I think it’s a big help.”

Of course, team possession metrics don’t mean much two weeks into the season. But the Hurricanes are likely a better team than many expect them to be, and rely on a coach in Bill Peters who, like Mike Babcock (whom he coached under as an assistant in Detroit), had stops at both the University of Lethbridge and the WHL’s Spokane Chiefs. Peters guided a 2008 Chiefs team that included Tyler Johnson, Jared Cowen, Dustin Tokarski and Jared Spurgeon to a Memorial Cup championship.

But there aren’t any vast, binding tied between the Kings and Hurricanes – unless you acknowledge that the Raleigh-based club owns the Kings’ first round draft pick this year as per conditions in last spring’s trade that also sent defensive prospect Roland McKeown east in exchange for Andrej Sekera.

“You’re a lot less familiar with them, so I think the video preparation, I think that’s a big help of [teaching] what they try to do and what they want to do and what we need to focus on,” Lewis said. “But I think the biggest thing for us is to just keep taking steps in the right direction and make sure we keep playing Kings hockey.”

Given that Los Angeles’ 4-1 win over San Jose last night represented the club’s third straight win, and that Sutter and the players have been encouraged by the team’s play following opening night, it appears they’re making the appropriate steps at this point in the season.

Trevor Lewis, on penalty killing and defensive zone coverage in San Jose:
Trying to limit their chances, we know they’re going to get shots, especially on the power play. The penalty kill was good. I think we kind of kept them from what they want. They want to get shots and traffic to the net. The D did a good job of boxing out and the forwards did a good job getting in lanes and stuff like that. I think we did good getting pressure on them and taking away what they wanted to do on the breakouts, as well.

Lewis, on the challenge of having only one practice over three days before San Jose:
Yeah, I mean two days off is a little different. You’re not quite used to that, but I think guys did a good job and coaches did a good job of that practice being a good skate and getting us ready to go. Obviously, some of the guys need a rest and I think it was good for them.