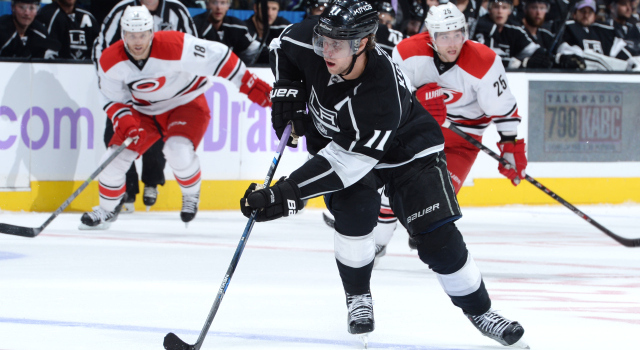 Tyler Toffoli, on what has contributed to their four-game win streak:
I think being more sharp. Our pressure on the backcheck has been a lot better, making them kind of dump it in and our D are doing a good job of turning it up and getting it out of our zone.

Toffoli, on his power play goal:
I think tonight Marty jumped in, got a scoring chance and it went back out to Hoff and he just made a great play over to me. I just had an open shot, it went in.

Toffoli, on whether there is something different in his game on this scoring run:
I think tonight, for myself, I wasn’t really thrilled with how I played. Just, like I said, I had an open shot on the power play and Looch made a great play to me on the two-on-one. [Reporter: What didn’t you like about it?] I just wasn’t breaking out and not making crisp plays and not doing a great job on the wall.

Toffoli, on whether his patience on scoring opportunities has developed with experience:
I just try and find different ways to shoot the puck. You can’t score every goal the same. You’ve got to find ways to score different goals and I’m trying to do that right now.

Toffoli, on whether it feels like the puck is finding him:
I try and find the open ice and try to have a step and an idea of where it’s going to go. I think right now, it’s working well for me. I’ve just got to keep going and keep working hard. [Reporter: Are you thinking ahead?] I’m just playing like I’ve always played growing up and, like I said, trying to find the open ice.

Toffoli, on whether finding the open ice is a natural instinct or taught:
I think growing up I think I kind of always did that. I just kind of stuck with it and right now it’s just working for me.

Toffoli, on whether he sees his current scoring streak as building off of last year:
It’s just trying to get better every night. Scoring goals is obviously fun, but I think we know as a group here we want to win games. Kopi scored a huge goal for us in the third. I think that really killed their momentum that they had going. They had a really good second period there at the end and I think we held their push. Like I said, Kopi had a huge goal there. Really put it over the edge for us.

Toffoli, on whether the team is back to their style of hockey:
Getting there, I think we know we can still get better. Like I said, I said it last game and the game before, it’s early in the season. We’ve got to find ways to get better and teams are going to keep getting better throughout the season.

Anze Kopitar, on losing the faceoff battle in the game:
One of those nights, one of those teams. The guy you’re going against just has your number. It usually doesn’t happen often, but it did tonight. Right now, it’s not a big deal. It would’ve been a big deal if things didn’t go our way. It’s just one of those things I think. Sometimes you just don’t feel as good on draws and the guy has got your number. Obviously they’re coming in and I think they were fourth in the league, too. So they’re a pretty good faceoff team obviously. It’s hard. Again, they’re a really good faceoff team. So it’s just one of those nights.

Kopitar, on whether the team has established a rhythm on the penalty kill:
It’s the same thing getting power play goals, it just builds momentum for you. When you kill a penalty there’s obviously more life on the bench. When you see guys block shots, get in lanes or clear pucks, it just builds up momentum. The last few games, we’ve been doing a good job and carried it into a five-on-five where we took charge right off of that.

Kopitar, on what Carolina’s defense does well:
They skate really well, obviously. You have to be extra careful carrying the puck up the ice so you don’t get stripped, because they have a lot of speedy guys. If you lose the puck in the wrong area, they can create an odd-man rush pretty quickly.

Kopitar, on the power play:
We’re just progressing. We didn’t start off very hot and now we’re building. Sometimes it’s not how many goals you score, but it’s when you score them. Tonight was obviously a big one to give us the one-goal lead and then we went from there.