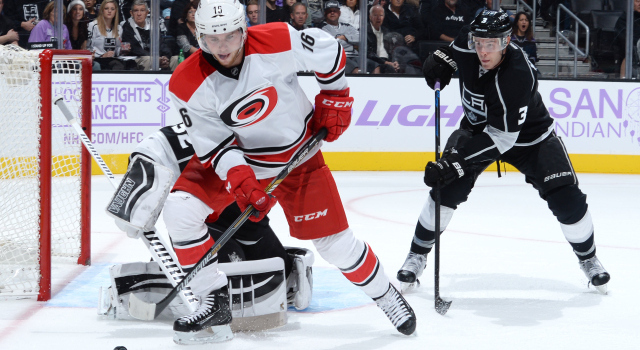 Bill Peters, on whether there are positives he takes away from the loss:
Oh, definitely there are some good things. I thought we came with a pretty good push there in the middle of the game but got behind the eight-ball when they scored on their first power play opportunity and then a couple break downs in the third.

Peters, on whether he was satisfied with the quality of his team’s shots:
Well you know what, I’d have to look at some of them. I don’t think there were a ton of Grade-A’s. They played pretty tight. I think there were some plays in around the net that you probably have a little bit more time on, that maybe we were squeezing the sticks. But we’ve got to get some of our higher end skill guys involved offensively. In order to do that, you’ve got to get into the dirty areas to score. If you haven’t scored, there’s a reason. We’ll look at it and try to come up with a better idea for tomorrow.

Peters, on whether Cam Ward was at fault for any of the goals:
No, he’s been excellent. The power play goal, I’m not even sure he’d seen it. Then the four-on-four goal, we knock it to the front of the net there unfortunately and a pretty tough read on the third one.

Peters, on adjustments he’d like to see on special teams:
Well, the power play is struggling. It’s struggled all year. So you’d probably, I’d think, have to look at some personnel – either changing the personnel or leaving the personnel and committing to it for four or five games and just leave it and see if they can’t get it figured out. And then on the penalty kill, we’ve probably got to use a few more guys up front.

Murphy, on facing Jonathan Quick:
He played well tonight. I felt like we got a lot of pucks to the net. We got some guys in front of him taking away his eyes and unfortunately we couldn’t get one by him. He played a great game.

Murphy, on whether he’s happy with the chances they generated:
Yeah, obviously we did have a lot of chances tonight. We’d like to limit our perimeter shots and get a bit more quality chances. But we put 40 at him and we couldn’t beat him. Sometimes you just don’t get the bounces. Like I said, we’ve got to be more hungry in front of the net.

Nathan Gerbe, on the power play:
I thought we moved the puck well. Again, we had chances but we need to score. We need to get to the net and get in front of the goalie’s eyes.