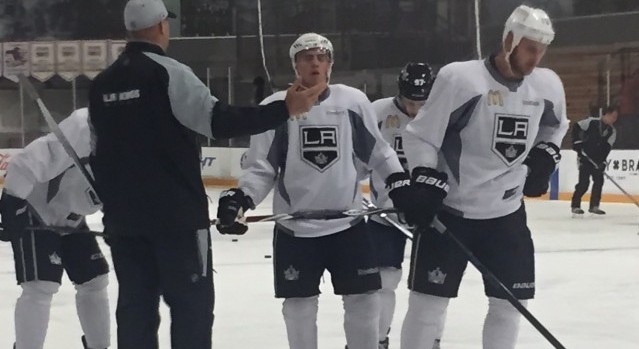 Several notes and Darryl Sutter quotes in advance of tonight’s game against the Carolina Hurricanes:

-The Kings held an optional skate at Toyota Sports Center, so there were no line rushes. Derek Forbort and Matt Greene remained on the ice for extra work with Jhonas Enroth; Greene is still hurt, and Forbort, who was under the weather yesterday, is still presumed to be out of the lineup. Andy Andreoff came off the ice before Jordan Weal, though Weal didn’t exactly linger with those who remained on for extra work. If there’s a change in the lineup, it could be a Weal-for-Andreoff swap, though that’s just a hypothetical at this point, and teams aren’t exactly hasty to change their alignment after 4-1 road wins over rivals. Jonathan Quick was the first goaltender off the ice and will be expected to start against the Canes.

-Former LA Junior King Ethan Fink, who serves as Assistant Video with the club, served as an extra skater. For the record, I spent four years playing hockey at Michigan (cough, cough, playing intramural, cough cough) and would be more than happy to provide a warm body in any on-ice drills as needed.

-Carolina’s skate is wrapping up at Staples Center. Via Michael Smith’s Tracking the Storm report at CarolinaHurricanes.com, the visitors are expected to line up as such:

-Cam Ward, who posted a 26-save shutout over Colorado on Wednesday, should get the nod in net, so we’re likely to see a match-up of the league’s only active Conn Smythe Trophy winners.

Darryl Sutter, on Jamie McBain’s call-up Thursday:
Well, normally you would have seven active defensemen on your roster. We saw last year because of other circumstances where we had to play five. We kind of ran the risk yesterday of taking six up there and then one got sick. We thought we had six healthy, but normally it’d be seven on the road. [Reporter: Can I ask at what point the decision was made to call Jamie up?] We find out during the night with the players if there’s anything wrong.

Sutter, on what he has liked about the Muzzin-Martinez pairing:
We think our defense can skate and move pucks, and when they’re on their game, they should be doing that, so it’s not ‘as a pair.’ I think it’s very easy to evaluate all our defensemen, including Christian, who’s our older defenseman, as skating guys that can move pucks. If they’re not skating and not moving pucks, then they’re not very effective. That’s a fact with our guys, and that’s how they all have to play, so if somebody thinks somebody’s standing out right now, it’s just because their utilizing their role – what their skill set is – and if they’re not standing out, that means they’re not.

Sutter, on what stands out about the Carolina Hurricanes:
I think just talking about their defense and our defense in the same light, I think they have really mobile defensemen and guys that can really skate and really move pucks, and I think the three young guys, Faulk has really taken a step up. You can see he’s a top player in terms of his overall game and not being such a high-risk player. Just a really top player, and I think the two kids in Hanifin and Murphy, obviously Hanifin’s a top pick, and Murphy is also, so they’re looked on as guys that are really going to take the next step, and it’s a big part of their team.