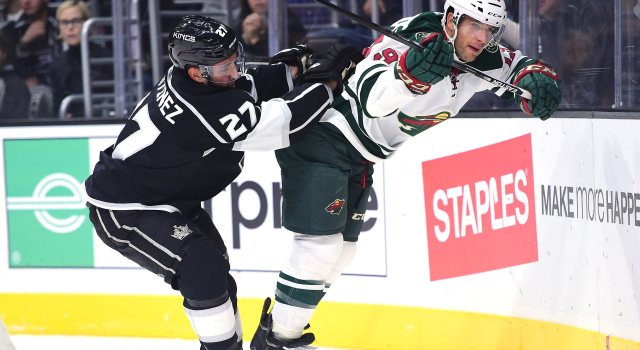 In addition to the conversation I had with Darryl Sutter today, in which he discussed the need for the defense to be able to “skate and move pucks” and utilize their skill sets, there was also an interesting chat earlier in the week with John Stevens in which the Kings’ Associate Head Coach offered encouraging words on Jake Muzzin.

“I think Muzz has always been a better player who focuses on the same thing – being a really good defender and being a shutdown guy,” Stevens said last Sunday. “That’s what he was when he played our best hockey, and then the offense will come natural to him because of the situation he ends up in because he’s a really good defender.”

That’s obviously an interesting assessment of a player who has respectably averaged .38 points per game through his young career and is often viewed as a defenseman with an offensive inclination.

Muzzin is yet to record a point on the season but has quickly developed chemistry with Alec Martinez; the two are a combined plus-six and the team is 3-0 since they were paired together for the Minnesota game. Muzzin called the nascent stages of the partnership “a good step.”

“With Greener being out it’s not so much playing differently, but focusing on the D first and hard on top guys and shutting down other guys and being quick in our zone,” he said. “It helps. We’re feeding off each other right now and I think things are going well. We just have to continue getting better.”

As both Sutter and Stevens have noted this season, the transition of the defensive reins to a younger core has been reflected in the club’s allotment of minutes. Muzzin is averaging 22:16 (down 26 seconds from 2014-15), Martinez is averaging 21:01 (up 1:05) and Brayden McNabb is averaging 20:45 (up 4:51) of ice time this season.

Jake Muzzin, on forming an identity as a player:
You want to be a strong, hard player, trustworthy, stuff like that. Sometimes you get away from that and you have to get back to it. D first, you’re a defender and that’s your job to defend and not to worry about offense. That will come with strong defense. Get back to that, hard, heavy down low and your offense will come when it comes. But you can’t force it.

Muzzin, on whether he was more active in getting shots through in San Jose:
We’re trying. I know myself, I have to do a better job at working to find lanes and stuff like that. But sometimes we’re trying too hard to do too much and maybe simplify and just get it and shoot it and that’s the right play. It’s tough. Guys are really good at getting in lanes and stuff like that. But it’s a challenge and you have to continue to work at it and improve at it.

Muzzin, on whether he likes the balance of the defense:
Yeah, Nabber and Dewey have been good. Bainer coming in last night played awesome. Hoff going to the left, it’s not easy to switch back-and-forth. Guys played well and we have to kind of regroup and get ready for tonight. It’s a new challenge and a new game.