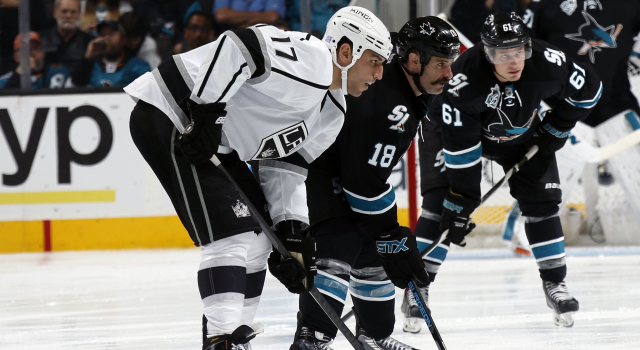 Jeff Carter, on whether this was an important victory:
I think it was big for us to come in and prove ourselves, I guess. I don’t know if that’s the right word, but we pretty much had to. They pretty much ran over us in Game 1 and this was a big game for us. It was a big test to come in here. It’s always a tough place to play and I thought we did a good job.

Carter, on recording his first goals of the season:
I knew they were going to come eventually. I was getting my looks and hopefully they keep coming. [Reporter: The second one was kind of interesting, huh?] Joner made a nice save on that one, the initial shot, and I caught a lucky bounce coming back. I’ve never really seen that before, so I’ll take it.

Carter, on the special teams performance:
We hadn’t been too pleased with the way things had been going with that special teams the first few games. So we’ve worked on it a lot the last few days getting pressure up ice and guys putting their bodies into shot lanes and D boxing out and Jhonny did a great job of swallowing up all the pucks. It was a good effort from everybody.

Jhonas Enroth, on his approach to the game:
I just tried to focus on the next shot all the time, trying to not think too much on the outcome and just try to live in the moment.

Enroth, on whether he was able to see the puck well:
Oh yeah, definitely. I think they had a lot of shots, but a lot of shots were from far out and I saw them the whole way in. So the guys played real well in front of me. It was a great first game for me.

Enroth, on whether it was important to earn a victory in his first start with a new team:
Yeah, definitely. Like I said, I’ve been waiting for a couple weeks now and I haven’t played a game for this club yet. So I was really excited to get this start.

Milan Lucic, on whether this classifies as a “statement game”:
Well I talked about it this morning, that was the most important thing about today’s game was the response from the 5-1 loss that we had on the opening game. Our mindset was in the right place and it’s a step forward from the last two wins and I think that was a big reason why we came into one of the toughest buildings in the NHL and get a big win here. So great job, obviously, by Jhonny in his first start here and he steps up and makes 39 saves. He kept us in there and gave us a big chance to win and today, finally, we were able to execute on our opportunities and that needs to continue getting better.

Tyler Toffoli, on his goal:
I kind of waited up. I knew Carts and Looch were kind of jumping up in the rush and it kind of made Joner, I think, think that there was going to be a pass. I think it opened things up for me. [Reporter: It looked like you deked him in and went around him.] Yeah, I almost toe-picked my first move in. I think I blacked out from there. But it was a big goal, the first goal of the game in this rink. I think that really got us going and I think we were moving our feet all night long and Carts had a couple big goals. We had a really good effort.

Toffoli, on whether responding to the opening night loss was important:
It’s huge. We came here to send a message that that’s not going to happen all year. Jhonny played unbelievable for us tonight. He made some huge saves. I think he had 17 or 18 in the first period alone and kept us in there and our D played amazing and we got a big W.

Toffoli, on whether this was an important game for the penalty kill:
Absolutely, five-on-three there, we’re making big steps here. But at the same time, we know we got better and after we win three in a row, it’s not going to change the way we’re playing. We’re going to keep getting better every night and keep winning games.

Toffoli, on the team scoring four goals in a game for the first time this season:
Obviously it’s nice, but I think that we can get four lines going better. I had a couple more chances and everyone is having chances to score and we need to bear down.