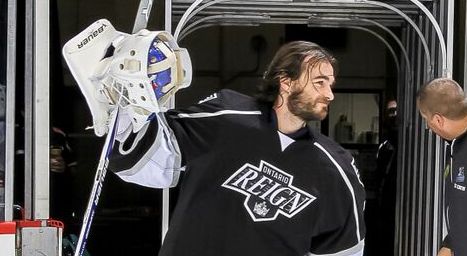 The view between the pipes for the Ontario Reign had been reserved for the up-and-comers. The Patrik Bartosaks and JF-Berubes. They were expected to lead the Reign into their first AHL season as the Los Angeles Kings’ primary affiliate.

Instead, unforeseen circumstances have former Canadiens and Avalanche goalie Peter Budaj nested in the No. 1 spot.

Earlier this month Berube was claimed on waivers by the Islanders and news broke that Bartosak would need surgery on an injured hand.

And while the development of Bartosak will have to wait while he rehabs, the Reign are reaping the benefits of Budaj both in the win column and with the intangibles he brings as a goaltender who carries valuable NHL experience. In this early AHL season, Budaj is 3-0-0-0 with two shutouts to boot.

“We were kind of caught a little off guard,” head coach Mike Stothers said of Berube-Bartosak situation. “But the organization did a great job and we had Budaj at camp for that reason alone because of the depth at the goalie position isn’t extensive or deep in the Kings’ organization. You wanted to have an experienced guy like Buds here and he’s come in a done a real good job for us. He’s played real well the first three games. I think his experience shows.”

Budaj, 33, helped the Reign pick up their first AHL win, shutting out Bakersfield in a 5-0 road opener. Last week he picked up 4-1 and 1-0 wins in Manitoba. Quite the difference from the 0-9-6 record he posted last season with St. John’s of the AHL following a trade from Montreal to Winnipeg.

“I worked hard last year, I love the game and I want to work every single moment,” said Budaj, a nine-year NHL veteran. “I think I was kind of getting ahead of myself last year with being two years ago I was playing for the Montreal Canadiens, conference finals in the NHL and then I was fighting for a spot on the St. John’s team.

It’s working for the Reign, too, who will face Bakersfield again this Friday in their home opener at Citizens Business Bank Arena in Ontario. Budaj’s goals against average and save percentage is tops in the league for goalies who have played more than one game, at a cool 0.32 and .983 respectively.

While stats are one thing, it’s the details that has Stothers tipping his cap. After Wednesday’s practice Stothers gushed about Budaj’s puck-playing and play-reading ability, which has helped his younger defensive group succeed in this early part of the season.

“There was a situation the other night where we were killing a penalty and one of our defenseman had a broken stick, so now you’re basically down a man, and he found a way to fight through and get the puck and cover it up so we could at least get a stoppage,” Stothers said. “Those are just little, subtle things that only an experienced guy would do.”

While it seems like Budaj may just be holding court until Bartosak’s return, there’s plenty still for the Reign to learn from with a goalie of his caliber in the room. Consummate and ultimate pros are words being thrown around by defenseman Vincent LoVerde and Stothers when being asked about Budaj and his backup. Budaj’s backup? Another NHL veteran and name known quite well in Ray Emery.

It’s still a young season, but in Budaj, Kings prospects have a rare player who’s been around the block and knows a thing or two about where they all want to go.

“He’s good with the younger guys, good with the older guys, treats everybody the same way and you really respect a player like that,” forward Michael Mersch said. “Always has tips, always has good stories. He’s played with some pretty good players. He’s played with Rob Blake, Joe Sakic, [Peter] Forsberg, he’s played with and against a lot of great players who me personally I watched growing up so it’s been pretty cool when you have guys like that on your team, makes it a little special.”