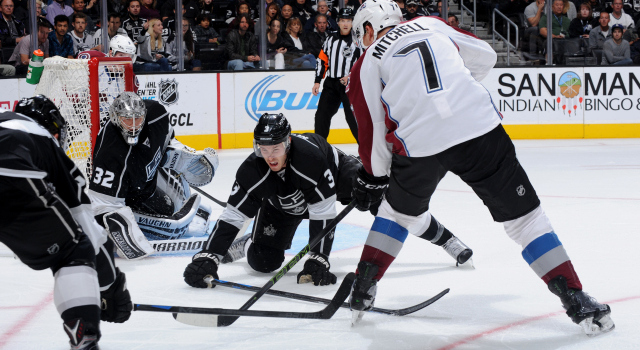 When Darryl Sutter spoke with reporters yesterday, he shared an interesting tidbit on the Lucic-Carter-Toffoli line – “I think the line has been very, very effective the past two games” – and reiterated his observation from the previous day that Brayden McNabb, whose play he praised, needs to play well consistently and isn’t in the position where a “youthful mistake” is forgiven. Several observations:

Darryl Sutter, on Milan Lucic’s fit with Carter-Toffoli over Kopitar-Gaborik:
I don’t know where he fits. We’re trying to win games, so I’m not too caught up in – you base it on a game-to-game approach. Maybe he plays with Kopi against San Jose. What was the question? [Reporter: Is there a way that he fits better with those guys, than maybe with-] I mean, I was told that he fits with Kopitar and Gaborik. I mean, that’s what everybody that knew everything about hockey in North America told me. You know what? I don’t know where he fits. [Reporter: Have you liked what you’ve seen out of him so far, though?] Yeah, I’ve really liked it. But you’ve got to win games, and you try and make it work as a coach. | RELATED READING: Milan Lucic struggles to find right offensive spot in LA Kings lineup (Yahoo! Puck Dady)

Sutter, on Brayden McNabb’s play:
He’s played really well. I said it [Sunday]. He’s got to have an identity. He has to have a presence on the ice in terms of his ability to move the puck and ability not to defend – his ability to check and compete – and he’s done that better than he’s done it any time at training camp. You know what? There are four young guys that are playing heavy minutes for us, and we need ‘em – Drew, Muzz, Marty and Brady – so they have to be really, really effective guys. You can’t continue to say that they are maturing, or that was a ‘youthful mistake.’ You have to see it as shift-in, shift-out that they’re consistent in what they’re doing, and that doesn’t make them mistake three, and that doesn’t mean a mistake defines their game, but you’re trying to limit them and make sure they’re really good competitors. | RELATED READING: LA Kings D Brayden McNabb Has Re-Discovered His Identity (Frozen Royalty)

Other Darryl Sutter observations that didn’t make their way into a story yesterday:

Sutter, on whether the Kings’ pace of play has improved:
Yeah I think the last four games. I know you base it only on winning and losing … but you don’t win every game, and sometimes you’re doing a lot more winning during games than people think.

Sutter, on Jonathan Quick rounding into form:
Yeah, really sharp. It goes without saying that the first game was a tough game for him, but it goes without saying also that Jonathan’s Jonathan. There are a handful of those guys in the league that can win you games, and he’s one of them.

The Kings aren’t practicing today – along with the Ontario Reign, they’re taking part in their annual charity golf tournamens – but there will be more to come on LA Kings Insider.