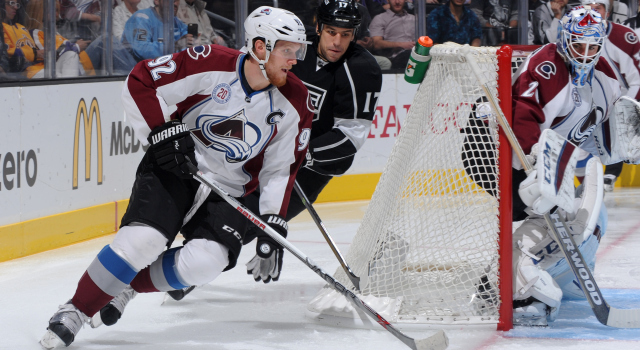 Erik Johnson, on the turnover that led to Tyler Toffoli’s goal:
It’s just a play that I have to know better on, bottom line. This time won’t be the last, but I have to make sure it won’t happen again. But you’ve got to move on. You try to make plays with the puck, sometimes that happens. Yeah, definitely my fault and it was the reason why we lost.

Matt Duchene, on being unable to capitalize on a late five-on-three power play:
I mean the guys moved the puck well. There were some good shots out there, some good chances. It was the first one we’ve had all year, hopefully the next one we’re able to convert.

Duchene, on missed opportunities:
I thought it was a hard fought game by both sides. Reto [Berra] kept us in it and Quick kept them in it. At the end of the day, it comes down to one goal and we were pretty close to tying it up there at the end.

Patrick Roy, on the late five-on-three power play:
That was really a key moment in the game. We had a good chance, a really good chance and their goalie made a good save.

Roy, on Erik Johnson’s turnover which led to Tyler Toffoli’s goal:
Come on, it’s a long year. Those things happen. I mean we had our chance to get back in that game and we need to stick together here. They played really well and they had a lot of good chances. I thought, defensively, they moved the puck well and they were sharp tonight. In that circumstance, I thought our team did a good job. It was a hard fought game and because we defended somewhat good, I thought we had a chance to win this hockey game.

Roy, on Reto Berra’s performance:
He was very good and he made some key saves in key moments in the game. I mean he’s really sound in front of his net and he’s under control and everything seems pretty easy for him right now.