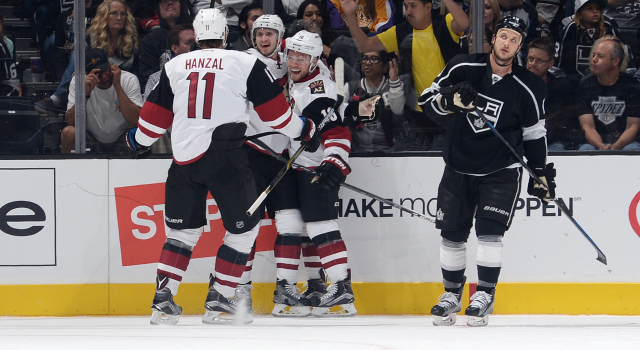 That the Staples Center scoreboard was spitting out misleading numbers and statistics or failed to work at all seemed to be a fairly appropriate representation of Friday night’s game, a forgettable encounter with the Arizona Coyotes in which the Kings took a step forward territorially and in scoring chances but not in the significantly more important responsibility of collecting points. After the game, the Kings more or less liked the majority of their 60-minute effort, but it’s hollow to find solace in any sort of directional beacon in the team’s play when dropping two points to a divisional rival that may end up as the 30th best team in the National Hockey League. 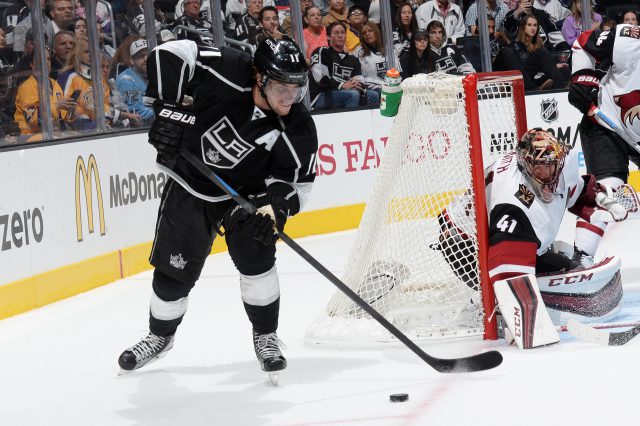 Though there was no cavalcade of Grade-A Kings chances in Friday’s game, there were still enough of the B-type chances that on some nights, when they’re getting the bounces, they’d look up at the scoreboard and see a two or three – maybe even a four if the power play was humming. Instead, they faced Good Mike Smith, the one who posted a .929 save percentage in March and April last season, and couldn’t cash in on any net-front grease despite a mostly regular presence in the blue paint. On the other side of the rink, Jonathan Quick showed that he’s still finding his game. After appearing to lose sight of a fluttering puck that deflected off Nick Shore’s stick upon being released from Zbynek Michalek’s stick on the Coyotes’ first shot, a real backbreaker came with 48 seconds left in the first period, when Drew Doughty and Kyle Clifford converged on nearly the same spot just inside Los Angeles’ blue line, allowing an unmarked Oliver Ekman-Larsson to take a vacation down the center of the ice in the Kings’ zone and snap a Max Domi feed off Quick’s stick and between his legs. Clifford had just gotten off the bench in the waning moments of Arizona’s power play, and the long stretch pass towards the L.A. blue line allowed just enough time for the Coyotes to capitalize on the Kings’ assessment of the play. In the second period, Los Angeles was felled by a pair of turnovers, one as Steve Downie pressured Jordan Weal into a turnover leaving the zone, and the other on a disconnect between Matt Greene and Dustin Brown on another breakout attempt. The Kings’ mistakes, coupled with Quick still trying to refine his game, meant that there were pucks ending up in the back of their net. Arizona, on the other hand, despite a disadvantage in skill, played a mostly smart, tight game in which their defense played well in front of Smith and was quick to clear the puck out of danger. 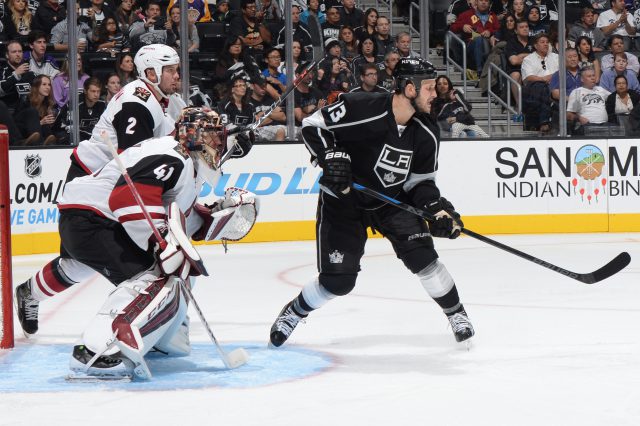 There are certainly concerns over the team’s start, but there’s nowhere near enough data to present any real evaluation of the club. As Sheng Peng noted, the Kings are shooting 3.3%, and their save percentage is .833. The significant difference between now and the start of the season last October was when the Kings were struggling to find their game (remember those fortunate wins over Minnesota and St. Louis?), Jonathan Quick was on top of his, stopping 225 of the first 236 shots he faced (.953%). They out-chanced the Coyotes 29-12 last night according to War-on-Ice, and if they were to post those numbers nightly (yes, obviously not all games will be against Arizona), they’d probably come away victorious 80% of the time. That won’t happen, but it is more likely that as past results indicate, whether against San Jose in the spring in 2014, or in emerging from the valleys of each of the last four seasons, the club finds ways to re-chart their direction out of the inevitable ruts of an NHL season. There are several warning signs – the Kopitar line was “a little better,” according to Darryl Sutter, though it was again held without a point – but there is also a strong constitution and a top-flight core. It does feel like there will be a long, standing-over-your-golf-shot-while-you’re-shooting-well-above-your-handicap wait before Tuesday’s game against Vancouver.