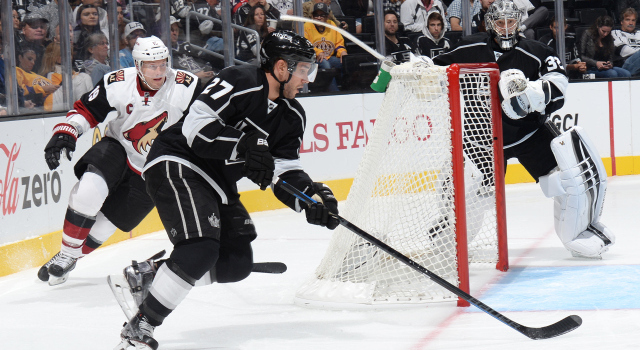 On whether it’s only a matter of time before pucks start going in:
I was hoping that was tonight was a matter of time, and we really didn’t get much. We probably deserved a little better fate. They scored some really easy goals, to be quite honest.

On what he saw from the “top line”:
I thought that they were probably were a little better than they were last night. They still have to finish opportunities. When you get them, you’ve got to finish them. That’s what top guys do. And you’re talking about Kopi’s line? [Reporter: Yeah.] Yeah.

On Brayden McNabb’s performance:
I thought McNabb played really well. Gave us a little bit quicker game. We need him to be an aggressive player for us, a little more physical player, and I think he tried to do that tonight.

On whether he considered replacing Jonathan Quick with Jhonas Enroth:
No, our schedule should be the fact – our number one guy should be able to handle the schedule, when you look at it. It’s a pretty light schedule in terms of games. You need your top guy to be on top of his game. [Reporter: And he’s not right now, correct?] He didn’t play very well tonight, did he?

On turnovers leading to Arizona goals:
They weren’t great chances. Weal turned it over on one, and Greener poked the one that kind of bounced between him and Brownie.