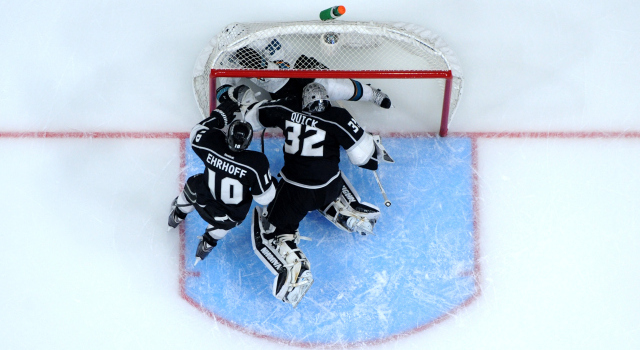 No banner-raising ceremony preceded the Kings’ season opener Wednesday night, though in vein with their losses to Chicago in January, 2013 and San Jose in October, 2014, they fell flat in a season opener that did not represent any noticeable leap from the style of play associated with the preseason. A sloppy, disjointed assemblage of missed passes, amoebic five-man units and poor checking, the Kings were not the faster team on the ice. Many associated with the team bristle when the Kings are referred to as a “slow” team – Darryl Sutter will remind you that Jeff Carter, Marian Gaborik and Trevor Lewis certainly aren’t slow – as they’ve shown the ability to play fast and have been very good under Sutter at moving the puck quickly up ice (examples: Dwight King’s goal versus New Jersey in Game 6, 2012, or Lewis’ goal versus San Jose in the second round of 2013). On Wednesday, though, there were hardly any moments, save for Milan Lucic’s first period rush up the right wing while they led 1-0, in which the Kings were able to use speed and open ice to their benefit. They played slow.

No conclusions should be drawn from Part 1 of an 82-part series, but Wednesday’s game indicated that it’s still going to take a little bit more time to cultivate chemistry between Milan Lucic, Anze Kopitar and Marian Gaborik. Though they nearly cashed in on an early opportunity that could have doubled the Kings’ early lead, there weren’t many other high-value opportunities that they generated, and the trio combined to generate only five shot attempts while each member logged a minus-two rating. Single-game possession metrics don’t really paint any clear picture, but that line was clearly outplayed by the Sharks’ top line, with Joonas Donskoi (+9), Joe Thornton (+11) and Joe Pavelski (+13) logging much better 5×5 Corsi-for rates than those posted by Lucic (-9), Kopitar (-8) and Gaborik (-10); as for head-to-head match-ups, Lucic-Kopitar-Gaborik was clearly in the red when seeing the same ice as Donskoi, Thornton and Pavelski (via War-on-Ice). If you’re looking for positive possession rates, Kyle Clifford had some decent metrics, as did Nick Shore, who scored the club’s lone goal by battling in front of the net to deflect a Dustin Brown perimeter shot past Martin Jones. (Shore also was whistled for a delay of game penalty for closing his hand on the puck, however, and San Jose scored its second goal six seconds into the ensuing power play.) Several of the Sharks’ goals came off simple faceoff wins.

There’s a not-that-funny running joke amongst those I sit with in the pressbox that for every “controversy” tag I include on the LA Kings Insider CMS that I stay at the rink for an extra hour after the game. Last night there were two “controversy” tags used, and as it stands this morning, early returns are that neither Dustin Brown nor Milan Lucic will get dinged for anything extra. Brown’s hit was late and wasn’t a good hit, but keep in mind that while he has toed that often blurry line of physical legality, he has only been suspended once in his career – two and a half years ago – and wouldn’t qualify as a “repeat offender” in the eyes of the Department of Player Safety.