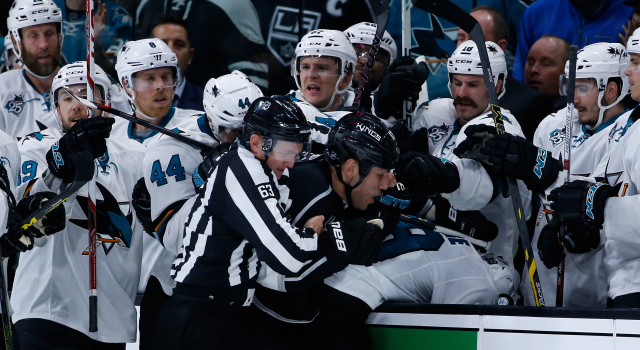 Milan Lucic received a match penalty for skating across the ice to make a hit on Logan Couture away from the play after Couture had hit Lucic immediately after leaving the penalty box during a Kings rush in the third period.

Couture had just stepped out of the penalty box pic.twitter.com/CucRwDqbfa

Darryl Sutter didn’t agree with the enforcement of the match penalty.

“It’s a borderline even roughing penalty,” Sutter said after the game. “I don’t know how many of you guys were still in your seats, but I was still in mine, and at best, that’s a minor penalty.”

Milan Lucic, on his altercation with Logan Couture:
Just a little hit. I didn’t like it, so I reacted to it. I don’t know why I got a match penalty. I didn’t cross any line, so obviously I deserved a penalty, but I don’t know why it was called a match penalty. At the end of the day, I don’t care who it is on the other side. If you’re going to hit someone like that, you could easily injure someone, it doesn’t matter what the situation is. I’m definitely going to react to it. That’s basically it. Five-one game, you don’t want to lose any game like that, never mind your first game at home, first game in five months. I hope that and everything is a wake-up call that we need to get things going right away. We just need to bring more emotion to the game on Friday.

Lucic, on the chippiness in his first game:
I think you kind of expected it, just being a natural rivalry from years past and playing in the playoffs, the California rivalry that comes with all three teams that are in it. I guess it was expected, and as the season goes on and you play each other more and more, you expect it to ramp up. Again, hopefully this game is a good kick in the butt to let us know that we need to wake up and start playing a lot better, because it’s never to soon to get your game going in the right direction, and right now we need everyone going in the right direction.

Lucic, on whether he asked the referee for an explanation:
No, there was no time for one. I didn’t need one. You can look at the video. Again, I crossed the line to deserve two minutes, but a match penalty, not at all.

Lucic, on whether he’d be surprised if he were to receive supplemental discipline:
I would be very surprised if I got anything extra. We’ll see what happens, I guess, tonight and tomorrow.

Lucic, on Couture exiting the penalty box before making the hit:
Yeah, I mean, he went straight to the box after he made the hit, so clearly he knew that he did something wrong and something was coming, so that’s basically it. I don’t have really much more to say about that.