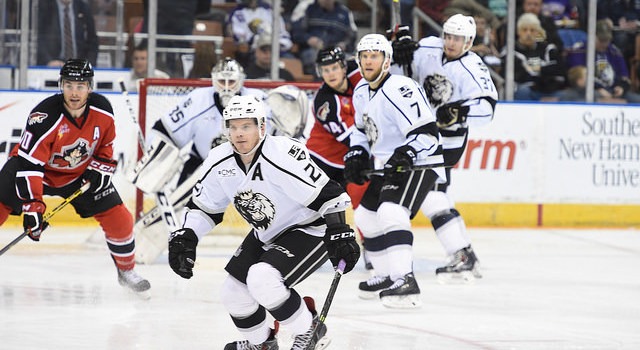 The Kings have traded 27-year-old forward Brian O’Neill to the New Jersey Devils in exchange for a conditional seventh round draft pick, according to TSN’s Bob McKenzie.

O’Neill, the MVP of the American Hockey League last season, totaled 22 goals and 90 points in 71 games in 2014-15 and won a Calder Cup with the Manchester Monarchs. In 192 career AHL games, O’Neill amassed 52 goals and 144 points after signing with the Monarchs in March, 2012. The 5-foot-9, 174-pound winger was a political science major at Yale, where he graduated in the spring of 2012.

A skilled if diminutive and older offensive prospect, O’Neill has been a consistent scorer at the AHL level, and there are those in hockey operations who felt that a 13th or 14th forward spot would fit him well in the upcoming season, were he to earn a spot out of camp. He’ll join a New Jersey team that should be able to provide more of an offensive opportunity than may have been available in Los Angeles this season.

With O’Neill leaving via trade, there are still several decisions that appear to be in the works before rosters are finalized this afternoon. Those decisions surround which players will be placed on injured reserve before the start of the season; it is expected that Dwight King, and perhaps Matt Greene, could be bound for IR. Though the rosters haven’t been finalized, it does appear at this time as though Jordan Weal will make the club out of camp.

If Kings hadn't traded O'Neill, almost certainly would have lost him on waivers. He's a 27-year-old fourth year pro. Small but fast/skilled.

UPDATE: As of 11:00 a.m., the trade had not been finalized and was still pending a call.