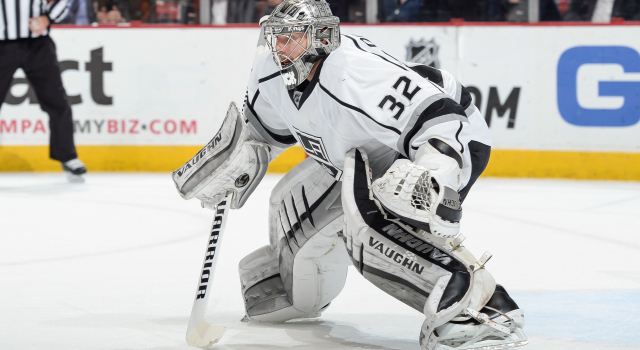 I spoke with Bill Ranford about several goaltending-related topics yesterday, and the conversation became even more timely after last night’s exhibition game against Anaheim in which Jhonas Enroth and Anton Khudobin combined to stop 59 of 62 shots in the Ducks’ 2-1 overtime win.

After last night’s game, Enroth spoke about playing a full 60 minutes in his new home and the rhythm he was able to establish.

Ranford also touched on several other interesting topics, including whether there could be a shift in the balance of J-F Berube and Patrik Bartosak’s starts for the Ontario Reign. Our conversation is below.

Bill Ranford, on whether losing weight could potentially affect Jonathan Quick’s mechanics:
No, I think it’s just kind of an injury-prevention thing. We really want to control his weight, and as the season goes on, his weight tends to climb a little bit and it’s more about just maintaining it this year and keeping an eye on it. A lot of it has to do with diet – once you get on the road and making sure that you’re eating smart.

Ranford, on whether goaltenders’ off-ice workouts differ from those of skaters:
Not really. I think Quickie’s a guy when he has an opportunity, he likes to really work on his legs, so if the schedule allows it, he’ll put in a heavy leg day. But pretty much the goalies are doing the same maintenance work that Matt Price sets up for the rest of the team.

Ranford, on establishing a relationship with Jhonas Enroth:
Well, I think it’s more of a comfort level and trust. You start off on an early relationship with Jhonas. You’ve got to get to know him and understand basically what he does on the ice, what he likes to do, and then there’s little tweaks to the game that we have to find that common ground that he’s going to be committed to. It’s not like it’s his first year in the league, but we’ve addressed some of the depth issues with him that I’m more in a belief of being a little bit more aggressive than, say, some goalie coaches around the league, and he’s liked it so far, and he’s played very well in the games, so it’s all good.

Ranford, on working with Peter Budaj in training camp:
I think with Peter, he hasn’t faced a lot of work in the two games he’s played, but Peter’s gone in there and made the big saves at the right time. HE loves to work, and so for him, it’s just little tiny tweaks here or there on his game. He’s 33 years old, he’s been around a long time, understands the game, so it’s just little ideas that I have, and he’s been very receptive.

Ranford, on whether J-F Berube’s ankle injury has greatly impacted his preparation:
Nope. Nothing’s really changed. The unfortunate thing for J-F is they brought Peter in, and they had to see him, or J-F may have gotten another game in there. We know what J-F can do. He’s a big part of this organization. He’s our third guy right now, and we want to make sure he’s ready and raring to go, and we were fortunate that he was ready for training camp. His goalie conditioning wasn’t the greatest, and he’s really worked hard to raise that level. He tested very well in the fitness, but his goalie fitness wasn’t great, and I think now he’s basically up to par to where he needs to be.

Ranford, on whether the balance of starts between Patrik Bartosak and Berube could change:
Well, I mean if you look at how they finished, I think they both finished almost neck-and-neck by the end of the season. You can’t argue with what kind of year J-F had. He was excellent for our group, but it’s also that we’re there to develop, so I think you’ll see a little bit of a swing where J-F will get a few more games in this year, but the bottom line is Barto’s basically got to battle for that playing time, and if he proves that he can continue to push J-F, then there’s going to be a little bit of a pendulum swing where maybe it’ll be 60-40 or maybe even 50-50. It depends on what happens. But as of right now, the plan early on is to kind of rotate them and give them a chance to prove themselves.