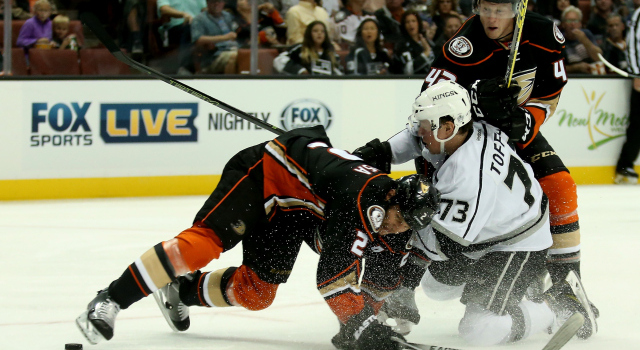 On whether Patrick Maroon’s goal was scored with a high stick:
Well, there’s no reviews in preseason, so I guess you could hit somebody over the head with your stick and get away with it, too. It was a high stick. I mean, it was way [above the crossbar].

On a 1-1 game decided by what could have been an illegal goal:
Yeah, it was a close game, a two-one game. [Score] one goal on the road, you won’t win very often.

On the Pearson-Carter-Toffoli line:
I think Tanner was really good, yeah.

On Anze Kopitar and Milan Lucic:
I think Kopi – I didn’t look at it – but he played a lot. Probably him and Getzlaf played over 20 minutes. Trying to get other guys to keep up with him.

On whether stick fouls naturally come down closer to the season:
Couldn’t tell you. You’d have to check.

On encouraging aspects of the game:
It’s good to see young guys and try and get some different combinations. I thought Trevor and Cliffy were really good again.

On whether the Kings are looking for a “bounce-back season”:
That would be good, yeah. [Reporter: Where are you at the moment?] Where are we at the moment? We’re trying to bounce back from last season.