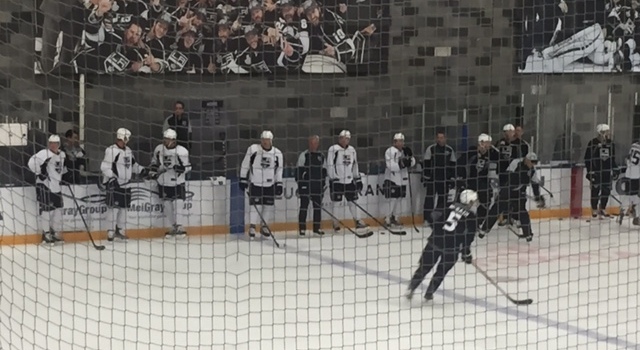 Good morning, Insiders. Here are the lines and pairings for tonight’s game against Anaheim, as indicated by line rushes at the morning skate:

-Tonight’s game starts at 7:00 p.m. and will be televised by the Ducks’ broadcast crew on Prime Ticket and carried nationally by the NHL Network. The game can also be heard on KABC 790 and I Heart Radio.

-Bear with minimal afternoon content and a potential delay in the game blog; I have a 2:00 p.m. meeting, followed by a 3:30 p.m. doctors appointment. Surely it’s a breeze to get from West Los Angeles to Anaheim during Friday rush hour, right? PRAY FOR MOJO

-A few quotes from Marian Gaborik, who isn’t slated to play tonight but shared some thoughts with LA Kings Insider after yesterday’s practice:

On how many preseason games he needs to feel comfortable for the start of the season:
I don’t know, like four games or something like that. We’ll see, it all depends. We have a couple days of scrimmage, that wasn’t the case in the past. It’s almost like a game, but obviously not like the real game. In the three games we have left I’m sure I’ll play.

On the looks he had with Milan Lucic on the left wing:
Everybody knows his strength and how powerful he is. Obviously we didn’t get the looks we wanted, but we still have some work to do. I think we’ll be OK.

On whether his game changes moving back to the right wing:
Well, I have to get used to it a little bit in the defensive zone. But also, there are more options from the right side going in offensively – you can take the guy wide, kind of hit the second wave, stop and go moves. I’ll have to work on those things, but I’ll be OK.

On being the oldest player in the room:
Yeah, that’s the kind of thing that’s interesting. So it tells you that our team is not that old and we have a good team. It’s kind of funny. [Reporter: Time flies.] Yeah, exactly.