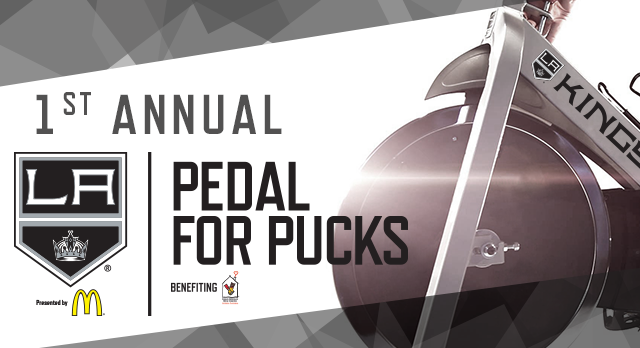 Pedal for Pucks, an indoor cycling-oriented fitness fundraiser benefiting Ronald McDonald House charities, raised nearly $63,000 during Sunday’s event (the latest tally on the event’s page placed the total at $62,872 at the time this article posted).

Under the direction of Cycle House, supporters registered either in groups or as individuals and spent 45-minute sessions on stationary bikes after an early stretching and warm-up session. Taking place on top of a covered ice sheet situated between the main Toyota Sports Center ice and the parking lot, the event coincided with Kings’ training camp and was visited by players and team staff.

The partnership between the Kings and Ronald McDonald House continued to be solidified; after the team had donated one million dollars following the Stadium Series game at Dodger Stadium, the Camp Ronald McDonald for Good Times opened its brand new Dining Hall and Activity Center in Mountain Center this past May.

A Wags and Walks adoption table was also a part of Sunday’s event.

Here’s a stick tap to Team Zoe, which raised $11,055 (!) for Ronald McDonald House Charities at Pedal for Pucks. To make a donation, click here. Social media accounts from the event are below.

A quick look at what Pedal for Pucks is as a sheet of ice is covered. pic.twitter.com/pnukNwCCQ9

1st ever @LAKings #PedalForPucks in the books! Such a fun time! Thank you @CycleHouseLA! pic.twitter.com/RAt79jMcNH

The #LAKings #PedalForPucks is underway! A great turnout for a great workout! pic.twitter.com/ZkDSiqRLtN