So, is King-Lewis-Brown going to be a thing? 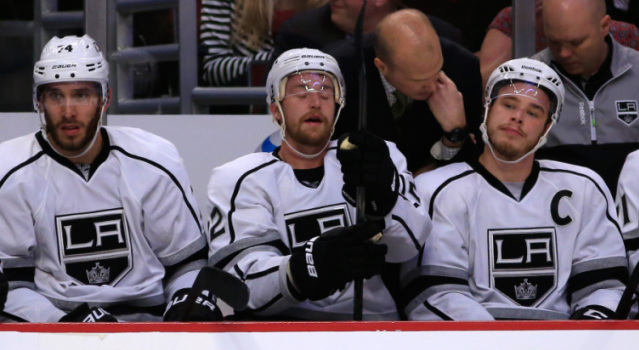 By having won Stanley Cups in two of his first three full NHL seasons, the mature Dwight King may be on the fast track to “veteran” status at the elder age of 25.

But one of the somewhat unfamiliar aspects has been the linemates he’s most often lined up alongside early in training camp. Though on the surface it seems as though a King – Lewis – Brown line (as has frequently been shown) was used heavily over the last several seasons, it really hasn’t been used all too often. In 2014-15, King saw 179:19 of five-on-five time with Dustin Brown (the fourth most ice time alongside fellow forwards) and 104:59 with Trevor Lewis (the seventh most). In 2013-14, King saw more even strength ice time with four forwards than he did with Lewis or Brown.

If there has been anything that could potentially resemble the current alignment, it came in 2012-13, when King saw more time alongside Jarret Stoll and Trevor Lewis than any other forwards.

So, what types of looks does Lewis show as a center, as opposed to a wing?

“He’s fast. He creates a lot of speed through the middle,” King said. “Like you know, he plays very responsible. He’s always going to be there to take care of the defensive zone. He’s pretty easy to read, which makes it a lot easier as a wing to play with.”

All three are obviously familiar with the Kings’ systems and expectations given the six Cups they’ve combined to hoist.

“Coming into camp they told all three of us we would start together, and … we’ve all played together before,” he said. “It’s kind of like a third line shutdown-energy role. Both great skaters, both puck possession guys. Just kind of help out on the offense and obviously play a steady game at both ends of the ice.”

A “shutdown-energy”-type line is probably accurate, given the three players’ defensive credentials. On the other hand, when King skated alongside Dustin Brown, the team scored 1.00 goals per 60 even strength minutes. When he played alongside Lewis, that scoring rate climbed up to only 1.14 5v5 G/60.

Still, the line should be among the more equipped possession-checking lines, should it remain together, and King has shown a propensity to shut down opponents by exhibiting that the best defense is a good offense and establishing heavy offensive zone time.

Dwight King, on any personal goals:
Coming in, you obviously just want to improve on your last year numbers. No matter who you are, you kind of look back on those and loopk where you can improve. It’s either goals, plus-minus, assists. Just could be big things like that, or it could be just minor things like limit your turnovers and a get-more-hits kind of a thing. You just basically take it a game at a time when it comes to goals, though, because you can’t look at the big picture in the end because then nothing really happens.

King, on his “new” mustache:
Not technically new. I kind of had the full beard going for most of the summer, and then I shaved ‘er down to this for Jordan’s wedding, and I kind of like the look, so I kept it through camp.