This is news every Kings fan enjoys hearing, even if no changes were expected: The entire television broadcasting crew, including 2000 Foster Hewitt Memorial Award recipient Bob Miller, and Jim Fox, who will be inducted into the Southern California Sports Broadcasters Hall of Fame in January, will return to broadcast 72 regular season Kings games on FOX Sports West / Prime Ticket and KCOP-13 (3/7 vs VAN, 4/5 @ CGY, 4/7 vs ANA) this season. The remaining 10 games will be carried nationally by NBCSN.

Preseason games against Anaheim at Staples Center on September 29 and Colorado at the MGM Grand Garden Arena in Las Vegas on October 3 will also be broadcast by FOX Sports West. The first regular season FOX Sports West broadcast will be the October 9 home game against the Arizona Coyotes.

Miller, who returns for his 43rd season as the “Voice of the Kings,” and Fox, who returns for his 26th season in the broadcast booth, will be joined by host/reporter Patrick O’Neal, who returns for his 11th season broadcasting Kings Hockey. Alex Curry will embark on her fourth season in front of the camera and returns as the host of Kings Weekly in addition providing in-game reports, while Kings alumni Sean O’Donnell and Daryl Evans will return to provide astute analysis and pre, post, and in-game reporting. I’ll also return to provide pre and post-game reports and interviews for FOX Sports West and KCOP-televised road games and the occasional home game.

On the production end, Steven Dorfman returns for his seventh season producing Kings telecasts, while Mike Hassan returns as director, a position he began in 1995.

He’s not a part of the FOX Sports West telecasts, but Nick Nickson, who will be honored with a Legends Night on November 10, is set to receive the Foster Hewitt Memorial Award at the Hockey Hall of Fame NHL Media Awards Luncheon presentation in Toronto on November 9. He and Evans return to the radio broadcast booth beginning with the club’s preseason game against Arizona on September 21. All preseason games will be broadcast on radio on KABC 790, I Heart Radio and the Kings Radio Network. 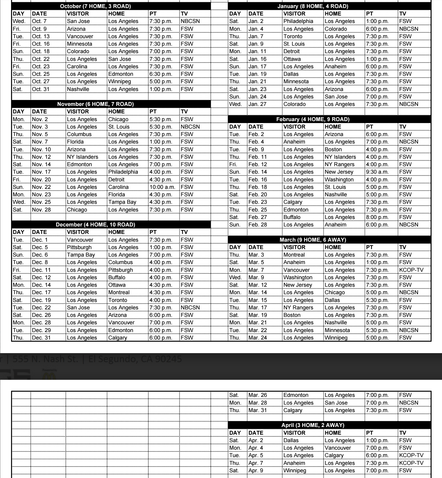