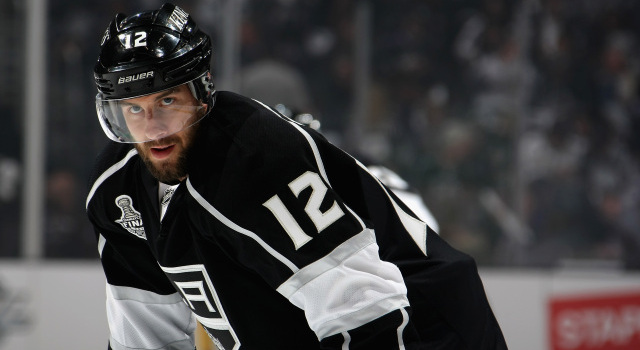 Though his role had been lessened by that spring, Simon Gagne appeared in Games 3-6 of the 2012 Stanley Cup Final series against the New Jersey Devils and raised the Cup above his head on the Staples Center ice on June 11, 2012. Those four playoff games, in which he totaled 32:14 while playing alongside Jordan Nolan and Colin Fraser in a depth role, came after Darryl Sutter had made a choice to replace Brad Richardson with Gagne after Los Angeles had claimed road wins at the Prudential Center in Games 1 and 2.

Gagne, 35, announced his official retirement on Tuesday after 14 NHL seasons. In 822 games with the Flyers, Lightning, Kings and Bruins, he totaled 291 goals and 601 points in 822 games. In his final season, the winger tallied three goals and four points in 23 games with Boston in 2014-15. He also scored Philadelphia’s Game 7 series-winning goal in 2010 after the Flyers had become the third team in NHL history to claw back from a three-nothing series deficit.

The significant majority of his production with the Kings came early in the 2011-12 season, shortly after the club had signed the winger to a two-year, $7-million contract. He totaled seven goals and 15 points in 22 games through November in the fall of 2011 and then accounted for seven assists over his final 23 regular season games in a Kings uniform before he was traded to the Philadelphia Flyers in the 2012-13 season for a conditional fourth round draft pick. A December, 2011 concussion sidelined Gagne until the Stanley Cup Final – he also had what the LA Times reported as a tennis ball-sized growth in his neck – and, combined with a prior concussion history, has been attributed to the decline in his generally consistent production over the final years of his playing career.

Though his Kings legacy may not be as revered as others who claimed at least one Stanley Cup with the franchise, Gagne was a classy individual and a true professional who served as a friendly and accommodating team ambassador with the media. Here’s all the best to Gagne and his family as he officially begins a new chapter in his life.