LAK.com feature: Looking back at Lisa on Ice 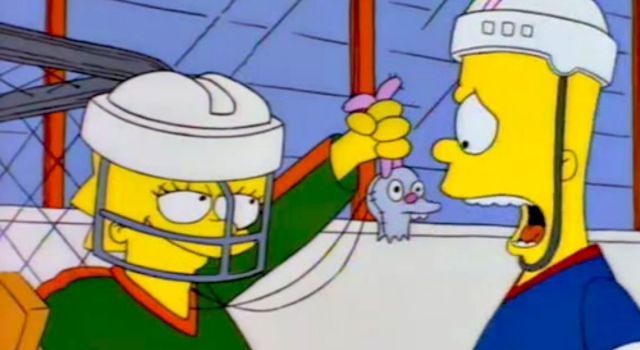 If you were a fan of both hockey and The Simpsons and grew up in the 1990’s, there’s a good chance you have a special attachment to Lisa on Ice, the episode that depicts Lisa Simpson’s emergence as a terrific pee wee hockey goalie, and how it impacts her relationship with Bart. It’s an outstanding episode during the prolonged peak of what many consider to be the series’ finest years, and along with Homer at the Bat, is one of the greatest sports-themed 30-minute episodes in the history of scripted television.

Mike Scully, who wrote the episode (and later served as a producer and showrunner), spoke with LA Kings Insider about the episode, which first aired 21 years ago this November. Our conversation was built into an article to commemorate the episode, which can be seen (provided you have a cable package) at SimpsonsWorld.com.

As the story develops, Lisa becomes a very good goaltender, leading her team to wins – and causing Bart to tire of her constant adulation. It reaches a head when Bart, told by Lisa to leave her room, responds by telling her that he’d leave while swinging his arms in windmill rotations, and “if you get hit, it’s your own fault.” Lisa then kicks air repeatedly, telling Bart, “if any part of you should fill that air, it’s your own fault.”

“That came from one of the writers, David Cohen, who went on to create Futurama,” Scully said. “That was a thing he and his sister used to do when they were younger. That was a real fight they would have – like walking towards each other, swinging arms and kicking – and whoever got hit was kind of the goal. And then we do it later with Homer [attempting to eat] a pie in the kitchen.”

“Any of those episodes where we explore Bart and Lisa and just hopefully acting like normal kids are a lot of fun for us, because they allow us to tap into all our childhood memories.”

Read the full article: Looking back at “Lisa on Ice”