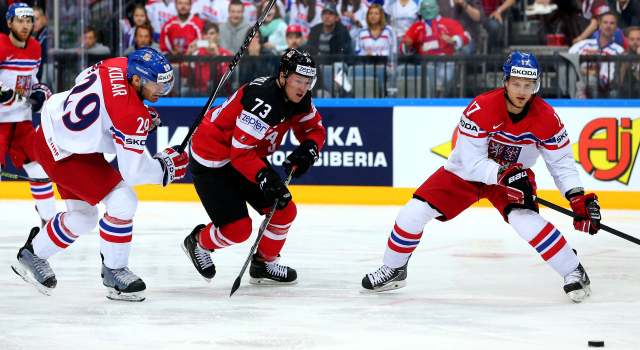 There will be a World Cup of Hockey! You already knew that, because it had been announced in January and Dean Lombardi was named the United States’ general manager last month.

The NHL’s media blitz continued as premier NHL stars sat in front of reporters for the second straight day and answered questions about the World Cup, which will begin on September 17, 2016 and will be broadcast by ESPN in the United States. (And let’s all hope that ESPN reprises its National Hockey Night theme.)

There will be growing intrigue with this event, which will allow many elite players an opportunity to showcase their skills and promote the game on a wide stage (and have the NHLPA split profits with the NHL), even if such promotion won’t approach the level of interest in hockey generated by the Olympics (which, by the way, the players still want to go to).

Several developments emerged Wednesday. Peter Chiarelli, Edmonton’s President of Hockey Operations and General Manager, and Stan Bowman, Chicago’s Vice President and General Manager were named managers of Team North America (previously referred to as the “Young Stars” team), which will be comprised of players 23 or under as of Oct. 1, 2016. These 23-and-under players will be available for selection exclusively for the North American side, which means that Connor McDavid, should he be healthy, would not play for Canada and is a virtual lock to play for North America. Players born on or after October 2, 1992 will be available for selection by their national teams or Team Europe. Tanner Pearson, born on August 10, 1992, missed the North America cutoff by seven and half weeks and will be eligible for selection by Canada.

Speaking of the Europe team, Franz Reindl, the President of the German Ice Hockey Federation, will serve as President / Team Leader, while former Oiler, Sabre, Islander, Penguin and Bruin Miroslav Satan has been appointed as General Manager. Former Edmonton coach Ralph Krueger, who currently serves as the chairman for Premier League club Southampton F.C., will coach the European team, which will be comprised of European players born outside of the Czech Republic, Finland, Russia and Sweden. Hello, Anze Kopitar.

It was previously announced by Hockey Canada that Rob Blake will serve as an assistant to General Manager Doug Armstrong.

Each team will be comprised of 20 skaters and three goaltenders, and teams must announce at least 16 players by March 1, 2016, with the full rosters announced no later than June 1, 2016.

The eight teams (United States, Canada, Russia, Sweden, Czech Republic, Finland, North America, Europe) will be divided into two groups of four (see below) and participate in a round robin tournament before the top two finishers in Group A and Group B will advance to a single-elimination knockout round in which the two first place teams will face the second place teams from the opposite group. Winners advance to a best-of-three championship series.

All games will be played at the Air Canada Centre in Toronto. Tickets will go on sale to the public on Wednesday, October 14.

Preliminary Round (round robin)