Other bits from the Lucic / Bro Jake interview 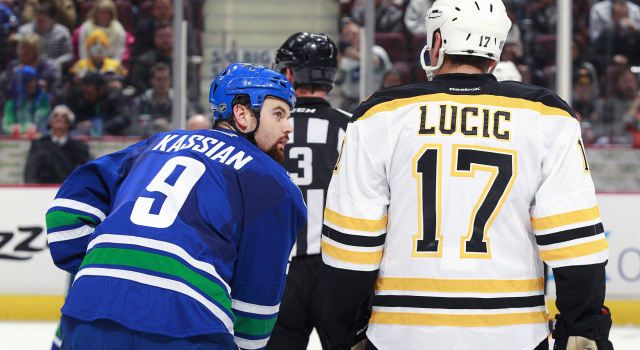 One of the mostly unimportant but still interesting side features of Milan Lucic joining the Kings is that new rivalries with particular teams are instantly created or enhanced. Montreal should be a fun place to visit (but when isn’t that true?) on December 17, while the Anaheim rivalry, further stoked by a sudden surge of principal actors from the 2011 Bruins-Canucks series, will nostalgically plant Lucic on the opposite bench (or, perhaps, penalty box) from Ryan Kesler and Kevin Bieksa.

These rivalries are built on heightened playoff competition, and like many members of the 2015-16 Kings, Lucic has fulfilling postseason experience that came at the expense of the Canucks. This has led to somewhat of a complicated relationship between the city of Vancouver and Lucic, the hometown boy who played for the BCHL’s Coquitlam Express before joining the WHL’s Giants and winning the 2007 Memorial Cup at Pacific Coliseum, the former Canucks building that once housed a particularly important Gary Shuchuk goal.

On Monday, he joined the Bro Jake Show on TSN 1040 Vancouver, and while Lucic’s attention-grabbing quote was that it’s been “a dream of mine since I’ve been a kid” to play for the Canucks, there was good substance elsewhere – part of which was that “the main focus is going down to L.A. and trying to make the most of that. If you look at the roster, we’re still a really deep team that has another chance to make a Cup run.”

The full interview starts at the 26:00 mark of the player below, and continues for a good 11 minutes, though the call dropped off briefly.

-Lucic said that he would arrive in Los Angeles on Tuesday. At the time of the interview, he hadn’t spoken to Darryl Sutter since a call much closer to his June 26 trade. “When we talked, he was obviously real excited. He loves the western boys,” Lucic said. “Obviously, my style of play kind of fits his style, the rough-and-tough Sutter types. I’m looking forward to playing for him and to see what it’s like to play for a different coach. I’ve played for the same coach all eight years, so having that kind of change might be a good, fresh start as well. I only spoke to him once – a great conversation I had with him – and i think once I get down there [Tuesday] I’ll be seeing him a lot and getting to know him.”

-Putting on a Kings jersey after having spent eight seasons in Boston will be different. “I think it’ll be really a change, especially at the start. I’m used to wearing the spoked B, and the black and gold because I’ve worn it for so long – eight years. To have different colors on will definitely be a little bit different, but I’m looking forward to the fresh start. Great jerseys, great arena, great everything. I’m really looking forward, like I said, to the fresh start.”

-While it’s important to acknowledge that Lucic does only have one year remaining on his contract, and the Kings are in a cap pinch, some of the more thoughtful words on Lucic’s comments Monday were written by Steve Ewen of the Vancouver Province. Said Ewen, who has covered Lucic from his junior hockey days through his NHL career:

“He’s a guy ruled by emotion. We’ve seen that with him, and even in a negative light. He wasn’t giving Jake and Pratt some snappy line, he wasn’t playing to the particular crowd.

Lucic had always talked about being a backer of Pavel Bure and Co. right up until the Bruins used a second-round pick in the 2006 NHL draft to grab his rights.

That said, using Lucic history as your guide can make you think that he’ll focus on getting a deal done with the Kings first off.”