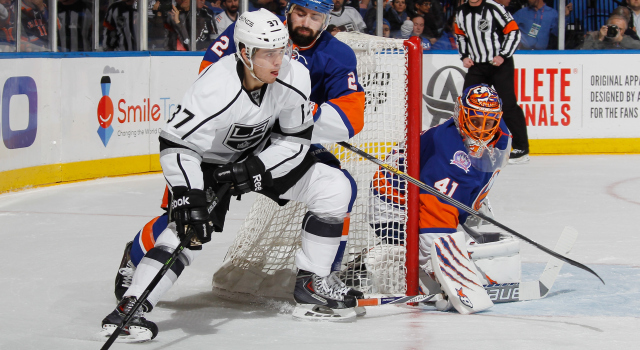 The first year of Shore’s contract is two-way. Weal, for what it’s worth, did have several KHL offers presented to him, but ultimately signed with Los Angeles, per sources in hockey operations.

If both Weal and Shore’s contracts are counted against the salary cap (Weal would have to clear waivers if the Kings wanted to assign him to Ontario, while Shore would not have to clear), Los Angeles now has $65.68-million allotted to 22 players for the 2015-16 season, figures that include Mike Richards’ cap recapture ($1.32M) and Jamie McBain’s contract (he’s on a two-way deal) but do not include the contracts of Slava Voynov (under league and team suspension), Jeff Schultz ($850K cap hit) or Derek Forbort ($863K cap hit). Next year’s salary cap has been set at $71.4M; teams may have up to 23 players on their active roster.

And with that said, it’s not a given that McBain plays in Los Angeles and Schultz plays in Ontario; it could be the other way around. Realistically, only one of Schultz and McBain should be expected to start the season with the Kings, barring a spate of injuries. Also, keep in mind that Forbort is entering the final year of his entry-level contract and would not have to clear waivers if he were to be assigned to Ontario; J.F. Berube, Brian O’Neill and Jordan Weal would have to clear waivers.

Though the Kings currently have $65.68 allotted to 22 players, they are still keeping space available should Voynov be reinstated after the NHL’s investigation, and should his immigration and legal status not prohibit him from playing in North America. If Voynov is not reinstated, or the Kings ultimately choose not to keep him, they would then have the cap space necessary to be able to trade for a player during the season. In other words, don’t hold your breath for a Cody Franson or Christian Ehrhoff signing.

Los Angeles appears to be done with free agent signings for the summer. Those who played in the organization last season but do not have contracts for 2015-16 are Richards, Jarret Stoll and David Van der Gulik. None are expected to return to the club.

For a clear visual of the Kings’ financials, General Fanager has a good guide.

All five players won the Calder Cup with the Manchester Monarchs.