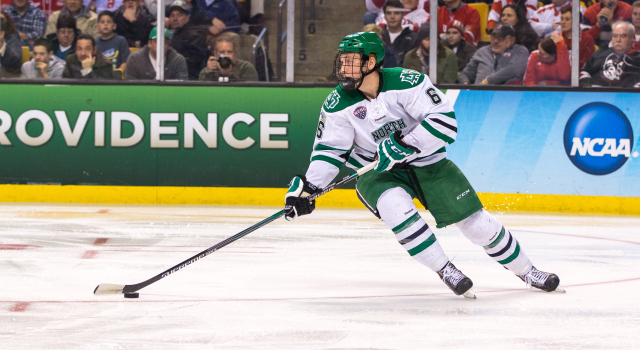 It’s not too often that Paul LaDue spends time around these parts – as a college-based prospect, his only visit to the Kings’ official facilities comes during development camp – so as the players left the ice following the first day of on-ice sessions, LAKI chatted with the defensive prospect who will return to the University of North Dakota for his junior year this fall.

The well-rounded defenseman has been consistent in Grand Forks, which doubles as his hometown and center of matriculation. Following up his 41-game, 21-point freshman season, LaDue potted five goals and 22 points in his 41-game sophomore campaign. He’s a modern defender who makes good reads and is poised in all situations yet carries a touch of skill in many aspects of his game and will continue to reinforce his leadership credentials as an alternate captain this coming season.

“I try to get better at every aspect of my game and hopefully I can contribute in every aspect on the ice – with penalty kill and power play,” LaDue said of his multi-faceted game. “It’s kind of my goal and all these defensemen coming up, they can kind of do everything. That’s what it’s going to take to get to that next level.”

That understanding is reinforced by the skill retention and fundamentals instruction he receives during his stays at development camp.

“It’s just little things. Everything you see on the ice here – catch and receiving passes and keeping your head up – you hear about it in pee wee and squirts and you just can’t stop working on it, you can’t get good enough. Stuff like that, just the simple things you can work on each and every day that will help you achieve your goals.”

LaDue spent ample time mulling over the decision to turn pro, but opted to continue his development at the University of North Dakota. In the spring, Kings hockey operations was comfortable with the choice, knowing that the developmental process in Grand Forks is among the best in NCAA hockey.

“I think [the decision] took me a month or month-and-a-half or so, but that was tough,” he said. “Either side, I don’t think, would’ve been a wrong choice. I just felt that going back for one more year will help me out in the long run, and I’m excited, more than ever, to come in here and work with these guys when the time comes. Hopefully I’ll just be another year stronger and just get that much better.”

Paul LaDue, on sharing the ice with NCAC and former WCHA rivals:
Yeah, for sure. Obviously there’s a Minnesota Gopher guy (Steven Johnson) I just met today and [Jonny] Brodzinski I probably played against four times. It’s fun to get out here and get to know the guys you’re battling against all year. You kind of really don’t like them much during the year, but you meet them here and they’re great guys and it’s a good time.

LaDue, on whether there’s incentive to show development, given that he’s not around the Kings as much as junior or Europe-based prospects:
Definitely, every time I’m around these guys I want to play my best hockey. They’re pretty focused on development and that’s what I come here to do. I come to get better. Every time I get around this staff and guys like Mike O’Connell, and Nelson Emerson, I just try to take everything I can from it and bring it back home with me.

LaDue, on the specific aspects of his game he’s working on:
It’s everything, ice skating, everything needs work. Just watching those NHL playoff games, how fast the game is and how prepared they are and just working on my preparation for games every day of the week and just little things like that.

LaDue, on what kind of coach the Philadelphia Flyers are getting in Dave Hakstol:
He was good. He’ll do a good job. I’m happy for him. [Reporter: Did you like playing for him? What type of a guy is he?] He’s a great guy. He puts everything in his team and he works. He’s at the rink from eight a.m. to eight at night. That’s kind of what you want in a coach who puts in the effort and puts in the time. He’s also there for you, too. He wants you to get better and he wants you to succeed. He’s going to do great.