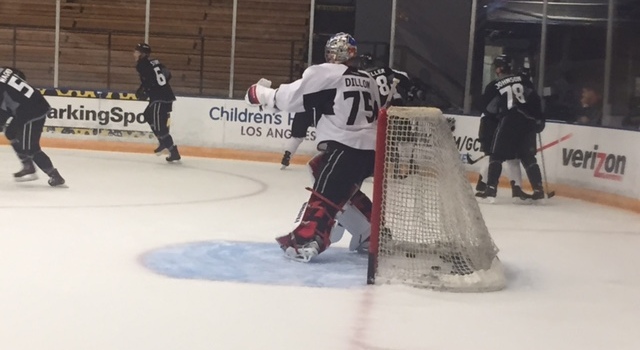 It does seem, on the other hand, that the Kings prefer to keep things a little closer to vest. It’s inaccurate to say that the Kings’ sessions are “low key,” but rather that they reinforce the organization’s thrust by focusing in fundamental aspects of development and without much fanfare. Also, “evaluation” isn’t really a key component of what takes place this week.

“We really take it slow here, so to get a real good read on what the players can and can’t do is difficult,” said Mike O’Connell, Senior Advisor/Development Coach. “We break it down into pretty specific skills or ideas or theories and try to get them to understand how we do it with the Kings. So probably by the end of the week, we’ll have a better idea of what we have here. But they’re all tentative and the players who have been here before understand what we expect, so it’s kind of nice to have two or three or probably half the players that have been through this, so they kind of lead the way.”

Eventually the team will engage in rookie competitions shortly before the Kings’ official training camp commences. Last year, Los Angeles traveled to Glendale, Arizona for a pair of games; the year before that, they held a home-and-home series with Anaheim. So there are opportunities for players to implement their instruction in game settings, but this week, that’s not at the forefront of the mind of those who have been hitting the ice at 7:45 every morning. Instead, it’s about development and education.

“You guys know – those of you who have been around here – that we take this week to make sure that we’re teaching the kids a little bit about our organization,” said Director of Player Development Nelson Emerson. “We don’t want to put them in a situation where people are up top and they’re evaluating on wins and losses and goals or assists and things like that. It’s the middle of the summer, it’s still early July, and we want these kids to start learning some of the trades and the fundamentals of what we try to teach around here with the L.A. Kings.”

Coverage of development camp will continue throughout the week. For now, here’s an update of what Emerson and O’Connell have seen this week, as well as a few updates on several key Kings prospects. Because of their long AHL season, no players with the Manchester Monarchs (outside of Alex Lintuniemi, who appeared in four regular season games) are taking part in this week’s camp.

Nelson Emerson, on his first impressions and whether anyone has stood out:
The one thing about this camp is it’s not an evaluation camp, I mean we’re here to teach, and that’s what’s so fun about it. You look back at all the years we’ve been doing it, it’s a really rewarding experience, and it’s so fun to watch the new players that are here that haven’t been here before, but you can certainly see the difference in the players that have been here in the past.

Emerson, on whether Erik Cernak has any language barrier:
He’s not too bad, really. But definitely when you’re explaining drills, it’s probably something we definitely need to take a little more time doing. The really neat thing here is Zykov, Val has taken a real leadership role in our camp in that regards, and he’s actually been kind of a mentor to some of the other players. We didn’t really have to say anything to him, he did it on his own, and that’s just kind of the leadership role where we just went ‘wow, good job Val’. He just did it on his own; it was great.

Emerson, on whether the prospects are familiar with the team’s puck possession traits:
That’s a great question, and we believe that from Dean Lombardi to Darryl Sutter, [puck possession] is an important part of our hockey team. Whether you’re a defenseman or whether you’re a forward, you have to manage the puck correctly. You just saw in that four-on-four scrimmage out there, we were asking the kids to make plays, we wanted them to pass the puck well and to receive the puck well, not to bobble the puck, and we showed them a lot of video on how important it is to make sure our team is looking after the puck. In regards to individually, we make sure to cover puck protection and the plays along the wall, and we teach the fundamentals of that for sure.

Emerson, on specific drills catered to puck possession:
Well, [that drill] was a part of it, because what we talk about is keeping the puck away from defenders sticks, and Mike Donnelly does an exceptional job of that. You really have to break it down for these kids and take them back to the basics, really. It’s their stance; it’s where they hold the puck. In junior hockey and college hockey, if you make a mistake or if you make a poor decision, a lot of times, because you’re such a good player, they put you right back out there. But at the pro level, when that happens, maybe not the case, so we teach them the importance of that.

Emerson, on Valentin Zykov’s leadership:
It’s interesting; we saw it on ice. When we were trying to explain drills and he was right there trying to help us with that. And then off ice, we see him taking a leadership role with that, he’s always got a couple of guys around him, the younger players, and it’s not just the Russian players, it’s the other players as well.

Mike O’Connell, on development camp helping to familiarize the players with the Kings:
It is and we have a couple things that we really stress in how they practice. We really want to try to change their habits, change the bad habits and really kind of work on their real good habits. Again, their goal is to be in the best league in the world and the players they’re going to try and replace understand what they’re doing and we to make sure that we speed that process up for them as well and make sure that they’re prepared as possible.

O’Connell, on what habits are trying to be eliminated:
Well, most of the habits are things that are industry wide. Practice habits basically, practice like a pro, prepare like a pro. Receive a pass like a pro and make a pass. Things that have to understand that we expect it and a bad pass is unacceptable and to try to get them to work at it and most of our drills, as any drills are, are unopposed so there is no reason why a pass shouldn’t be made. Instead of getting another puck and going again, we make them understand that it’s unacceptable.

O’Connell, on whether there is a focus on keeping the development camp low key:
That’s probably a question more for Rob or Dean. We know what we want to do. We understand that we have five or six things we want to work at hard and we just go with what we think. This will be our 10th year doing it, our 10th year going into it. We’ve had some pretty good success with some of the players coming through and we just stick to what we think is important. Dean has given us some pretty good latitude and he understands what we’re trying to accomplish. Again, it’s basically just trying to make these guys pros and make them understand how lucky they are and how much work it will entail to reach the NHL.

O’Connell, on whether puck possession focus starts at development camp:
Well I think you’re always looking for players who can handle the puck and possess the puck at the draft. But it’s something that we really stress. It’s something that we really stress in some of the fundamentals that we do in where to carry the puck and how to carry the puck and how to penetrate without getting the puck stripped. That all requires a change in some of the way they do things – not exposing the puck and trying to keep it away from the opposition while you have it. Again, you can’t just tell them. You have to show them over and over and over again and try to get them to understand the importance of it as well as the players who don’t have the puck. Let’s face, Tom Brady is a tremendous passer but those players have to get open. If those players don’t get open, I don’t care how good of a passer he is, he’s not going to find them. We really stress that these players need to get open as well.

O’Connell, on the organization’s message for the Calder Cup winning Monarchs:
Just get the rest. They went through a terrific experience for them and we told them all, take at least three weeks to get yourself ready. They need time away. Most of these guys are pretty young and need time to see their families and get themselves centered again because a long season like that followed by a grueling playoffs, it’s difficult. They’re young so we want to make sure they get themselves back and get themselves healthy, get themselves centered, get themselves mentally right and emotionally right. Because it’s a toll, that takes a toll mentally and emotionally on those players. We’ll have them come back fresh as possible and get back at it with us.

O’Connell, on the camp reinforcing some concepts for Valentin Zykov:
Yes, it is. He’s a great student, he’s a great teammate and he takes it very seriously. Everything we do and every rep he does, he tries his hardest every time. He’s going to be fine. He’s a good player and his work ethic and attention… even with this lack of English, his English has become much better. But he applies himself every time he’s on that ice and that’s going to take him a long way.

O’Connell, on how close Zykov is to making the pro game:
Not yet, we got a little bit of him at the end of the year but he was banged up. So we didn’t get a chance to play in Manch. We would’ve like to have seen him there but he was injured. We’ll see this year. He’s a good player, a really good, sound player.

O’Connell, on what he’s seen in Erik Cernak:
Big, he’s big. He’s very fit, very enthused and very enthusiastic. A young defenseman, and again it’s so early we haven’t really done any kind of real game situations. We’re just basically trying to get their feet underneath them and get them to understand where they need to be. [Reporter: Will you do game situations later on?] Yeah, we will. We do a little bit every day but it’s basically pretty easy. Again, right now we’re just trying to get them to understand the Kings way. But he looks like he’s a fine prospect.

O’Connell, on what he sees Cernak doing next season:
I don’t know. I know he’s got a couple options. I think he’s able to play when he was drafted and his age, the fact that he wasn’t drafted into the Canadian Hockey League, I think he can play on our Ontario team but I’m not sure what they have in store for him. It will all depend how he makes out in camp and how he looks.