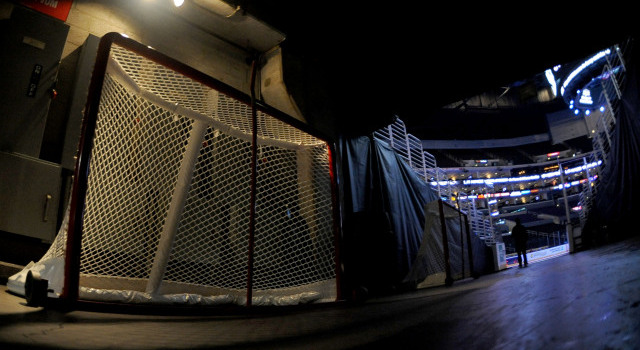 In a deal reached with prosecutors, Slava Voynov pleaded no contest to a misdemeanor count of corporal injury to spouse and will serve up to 90 days in jail, undergo three years of probation and 52 weeks of domestic-violence counseling, and will serve eight hours of community service, per reports from the Los Angeles County Superior Court in Torrance on Thursday. Voynov, who was alleged to have punched his wife, Marta Varlamova, in the face, in addition to choking her, kicking her, and pushing her into the corner of a wall-mounted television during an altercation at their home on October 20, had been facing a felony count of corporal injury to a spouse with great bodily injury and the threat of up to nine years in prison.

Voynov is to surrender no later than July 14 to begin his sentence, which could be reduced for good behavior and because of “overcrowding issues.”

From Rich Hammond of the OC Register:

”I think we were able to reach a fair disposition that reflects the conduct and ensures protection of the victim as well as the community,’’ [Deputy District Attorney Frank] Dunnick told reporters outside the courtroom.

Voynov’s lead attorney, Pamela Mackey, declined comment as she left the courtroom, as did Voynov and his wife, Marta Varlamova, who silently walked together. Earlier in open court, Mackey told Taylor that, like Dunnick, she believed there had been a ”fair disposition’’ of the case through the plea agreement.

Little clarity was gained towards Voynov’s future with the Kings. He remains suspended by the NHL, with questions raised towards how his misdemeanor would affect his immigration status or ability to travel to Canada.

There has been no change in his league-imposed suspension.

“Nothing changes with regard to his status vis-a-vis the NHL. No timetables for next steps,” NHL Deputy Commissioner Bill Daly said in an email to the OC Register. “I imagine we will hear from the player’s camp and the (players’ association) when they are ready to engage.”

Questions remain about how Voynov’s immigration status could be affected.

From Nathan Fenno of the LA Times:

“A no contest plea, especially if the defendant admits damaging facts, can effectively be treated by immigration officials as a guilty plea,” said Michael McCann, a sports law professor at the University of New Hampshire. “It could be a complicated road ahead.”

McCann said that U.S. Immigration and Customs Enforcement will assess whether Voynov’s plea warrants deportation. He could also face complications traveling between the U.S. and Canada for games.

In a separate process, Voynov remains suspended by the Kings due to a torn achilles suffered during activity away from hockey. In conversation with those in hockey operations, that team-imposed suspension will remain until he is fit to play, and he will not be paid if the suspension lasts into the season, should he be cleared to return. Earlier this week, Los Angeles chose to terminate Mike Richards’ contract by citing a “material breach” of his SPC, though details are scant of Richards’ situation beyond being “under investigation for alleged possession of a restricted substance while attempting to cross the Canada-U.S. border,” as reported by the Winnipeg Sun. No charges were filed against Richards at the time of the article; the “restricted substance was reported by the Sun to be OxyContin.

Voynov’s trial was scheduled to begin on July 6. He will be able to serve his sentence at either a county or local jail, Larry Altman of the Daily Breeze reported, and must also pay “about $700” in fines.

The Kings released a statement on Voynov’s no-contest plea, saying, “We believe the legal system has effectively resolved this matter and the punishment is fair and just. Any act of domestic violence is unacceptable. As an organization, the prevention of domestic violence and the education of our players and employees is of paramount importance. We will continue to actively develop and implement a strategy to deliver this message. We remain steadfast in our support of the National Hockey League as they now begin their own investigative process. Until that is complete we will withhold further comment.”