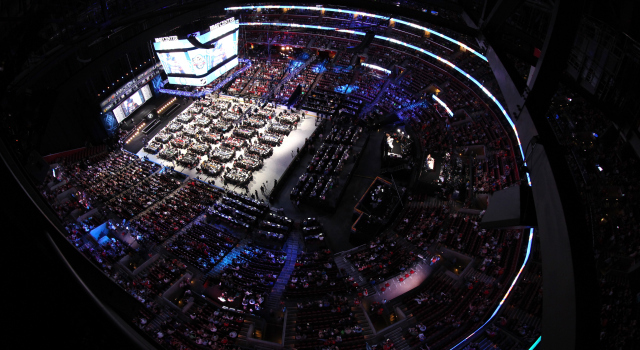 On scouting Erik Cernak and selecting him in the second round:
We’ve been looking at him, Nick (Niklas Andersson) and Ruuts (Christian Ruutu) were really high on him, Mike and I had seen him quite a bit, I’ve seen him in the World Juniors. In terms of his character, when we talked to him, he’s an outstanding kid. Very rarely do you have complete control over a European’s development path, and we have complete flexibility in terms of his development path. So, there are four or five different options we can deploy with him next year, all the way from staying in Europe, to going to the American league or going to Juniors – if we sign him. So, in terms of what our development staff can do, and the fact that we can get our hands on him immediately, where a lot of times – look at Kempe’s adjustment in just one month. Give our guys the whole summer, then a whole season. If that’s the path we choose, it’s rarely open to us, and the attributes he brings at that pick, with that flexibility, made it for us a no-brainer.

On jumping up in the draft to take Austin Wagner:
It’s that classic scouts thing – ‘oh we didn’t think he’d be there’. In terms of not thinking he’d be there, that’s fine, everybody says that. But he’s a guy that we really wanted. He brings absolute blazing speed, and he’s a guy who attacks the far side of the post, not the near side, he puts his body in harm’s way and he’s single-minded when he attacks the net. Brent and I spent considerable time with him, and when we talk about culture and what fits into the Kings’ model, he is the Kings model in terms of his intangibles and off-ice attributes.

On scouting Alexander Dergachyov and how much contact was made:
We didn’t have as much contact with him, as he was in Russia. It was a little hard at time, but we had enough. Heavy, heavy, heavy, heavy presence, possession guy, he’s not even close to being full grown – he’s 6’4”, but if you look at him, a guy who plays that heavy and still has room to grow, he played as heavy as a 20 year old plays in World Juniors, he’s played in the KHL. In terms of how we build, in terms of how we like to win, in terms of how we like to possess the puck, he’s a North American prototypical possession guy, but he’s in a Russian body.

On whether Dergachyov will stay in the KHL or come to North America:
He’s going to stay in the KHL for a minimum of one year. Right now, I would think one year would be the perfect amount of time for him to spend in the KHL, but that’s a little more fluid. It really depends on how much time, what his development is like if we determine he should stay another year or two or come back after that.

On the overall thoughts of the draft:
We’re definitely happy with what we came out with. We had no first round pick, and that’s just the reality of competing for a Cup. So, you move on, and you realize now that you have to hit. You have to find a Shore. A Toffoli would be great, but you have to find a Shore. You have to find a Martinez, you have to find a Miller, so, we go in with that mindset. I think we did tick those boxes off. We had a little less flexibility than I would have wanted. I wouldn’t think not having a sixth round pick would be a big thing, but it actually affected some of the moves we tried to make, both up and back. It impacted our flexibility. We still were fortunate it worked out for the most part, and the planning and the preparation the guys did attributed to that. But there were some scenarios that obviously we just couldn’t quite pull off.