Lucic emotional in leaving Boston, but excited to join L.A. 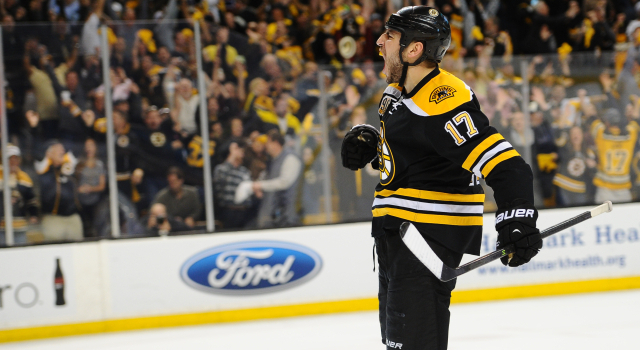 On receiving the trade call from the Bruins:
It was definitely an emotional call. I could sense it in [Don Sweeney’s] voice that it was an emotional call for him, and even for me, I was hearing and reading everything on Twitter, and then when I saw he was the first one to call me and give me the news about it, obviously my emotions were there too. At the end of the day, Boston is a place that I went to as a 19 year-old and I got to be there for eight great years and got to be a part of a Stanley Cup winning team, it’s where I grew up as a person and the player that I am today. Without the help of everyone in the Bruins organization and the city of Boston and especially the fans, I think that’s why it was such an emotional call to be a part of.

On at what point he thought the trade possibility was real:
It’s funny, I didn’t really know what to think to be perfectly honest, but you hear the last couple of days all of the speculation that’s going around, especially in the social media world that we live in today, with that many speculations, you know, a lot of the times they’re just rumors, but when there’s that many speculations there has to be some kind of truth behind it. So, I really didn’t know what to think, I’ve had a lot of mixed emotions the last 48 hours, I kind of had that nervous, anxious, excited, sad, all-in-one feeling going on in my stomach, especially this morning, like something big was going to happen, but that’s basically it. Again, with obviously the change in GM with the Bruins, you never know what’s going to happen moving forward, and you saw today that the Bruins made some pretty big changes.

On his thoughts on joining the Kings:
I think that’s the most exciting thing about moving on from Boston is, I guess, moving on to a team that already knows how to win. [The Kings] are not a team that’s learning how to win or trying to make that step to win a Stanley Cup, they already know how to do that. The possibility of playing with two really great players in Kopitar and Gaborik, it’s definitely a real exciting feeling, and I get to be a part of an organization to help them win another Cup, and to look at the roster right now, I’d say we’re definitely in the top two or three in the league right now as far as contenders. I’m more than excited to join a team like this that already knows how to win, and I’m just going to go there and be myself and be the best player I can be for the team.

On what he can do to be a part of the solution in LA:
I think a little bit of fatigue kicked in [for the Kings]. Obviously, you look at what they’ve done prior to this season in the postseason going Stanley Cup, third round, Stanley Cup. It catches up to you when you don’t have, like a lot of players do, a lot of time to rest. I think, in a way, it’s a good thing going into next season that they didn’t make the playoffs, so it gives the players a good chance to get their rest and get reenergized and back into tip-top shape and refocus and get hungry again to be in the playoffs and go at that Stanley Cup again. I think it was just fatigue kicking in, obviously there’s no excuses with that heading into next season.

On where he is now, when he plans to come to LA:
I’m out west in Kelowna, actually, up in Canada. It’s pretty funny, I just got home yesterday from Disneyland, I was just down there at Disneyland with my oldest daughter, just enjoying taking her for her first time to Disneyland. I mean, it would have been nice to get the news while I was down there so I could stay down there, I guess enjoy the start of being a King a little bit more, but as of right now, I haven’t thought too too much about when I’m going to come down to LA, but it’s obviously a great place to be and a great place to visit, and a short flight for me, being from Vancouver, so I’ll be there sooner than later.

On his daughter now living close to Disneyland:
I guess I’ve got to get an annual pass now she loves it so much.

On if he knows any of his new teammates:
I know Drew Doughty a little bit, we played together in the Canada-Russia series in 2007; we spent a total of 21 days together so I know him a little bit. In the last Canadian Olympic camp that was held in the summer of 2013, I was actually roommates with Jeff Carter. Those are the two guys that I know a little bit. Other than that, there are going to be a lot of fresh faces for me, so I guess you could say it’s a complete fresh start, and that’s what I’m looking forward to the most, getting a fresh start here and like I said, just being who I am and bringing what I can bring to the best of my abilities to the Kings, and hope that we can be where we want to be at the end of next season.

On the Bruins moving forward:
It’s tough to say, it’s really tough to say, especially because I’ve been a part of the organization for a long, long time. I was fortunate to be a big part of the identity we created over the years that I was there, but obviously moving forward, I still think they’re going to be a really good team. With Bergeron and Krejci, they have one of the best one-two punches as far as centermen go in the Eastern Conference and in the NHL

On scoring his first NHL goal against the Kings at Staples Center in 2007:
It was my first time in LA, and I have a lot of family that lives down in San Diego, and I remember them coming up. My parents flew down with my little brother, my grandmother came down as well. In the first period, I think I had a fight against Ivanans, in the second period I had an assist, and in the third period it was a two-on-one with me and Krejci and he gave me a really great pass back-door and I had an open net and I scored my first NHL goal there in the Staples Center. Obviously moving forward, I hope to get a few more in the Staples Center. Because I scored my first goal there, that arena’s been really special for me. Even looking back at the 2006 Draft, I met with the Kings three times before the Draft, and I thought they were going to take me at the 48th pick, but they ended up taking a defenseman and I ended up going 50th to Boston, which obviously worked out really well. What I thought was going to happen back in 2006 has happened now, so like I said, there’s a big part of me that’s sad for leaving Boston, but also there’s a big part of me that’s really excited about the opportunity ahead of playing for such a great team and organization as the Kings.