Lombardi on the trade, Gaborik to right wing and Toffoli 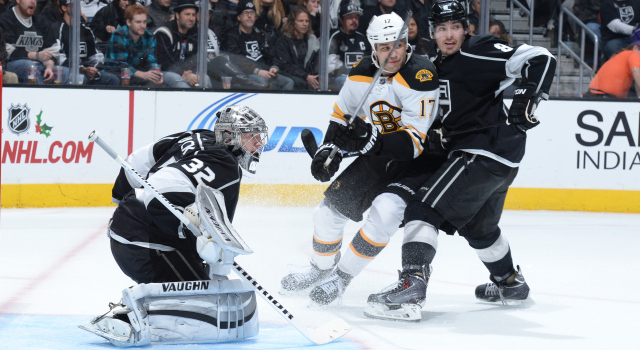 On how the deal came together:
I inquired about it at the end of the year, and obviously Boston was going through a transition, so I made an inquiry about him. But it was going nowhere, and I think part of it too, was Boston’s had a lot of changes going on. Then I kind of revisited it again, and it was kind of going nowhere – there was just no match. Then, I think getting here, I wasn’t anticipating [this]. This happens all the time – we were gearing towards a number of other things in preparation. It’s clear Boston has chosen this direction, so to speak, so really this didn’t get serious until last night. But there were very informal inquiries not long after the season ended, of course with Peter Chiarelli and then with [Don] Sweeney. But to say we were ‘working on it?’ I don’t think we weren’t working on it – there was nothing there.

On the trade’s impetus, and whether it was to off-set potentially losing Justin Williams:
To be honest with you, when we were looking at our team – I mean, this goes on all the time. When you have your team, even during the season, and when you have your scouts on the road, we felt that – you know how I do boxes – that we didn’t have the ideal fit for that box, and we had a list of players that would be ideal fits, and there weren’t many of ‘em. It’s the Clark Gillies-Bryan Trottier-Mike Bossy-type trio that most people think is the ultimate-type line. We also wondered whether Gabby was better on the right, and this was a box we thought in an ideal world, get a player like Clark Gillies. Again, there are not many like this in the league that can play with top players and bring that element. So, it’s safe to say, these are things you’re looking at even in November, because you’re always looking, ‘OK, what’s the next move for your team,’ just like we’re doing right now. ‘What’s your next hole?’ That’s why I made the inquiry, quite frankly, to see if this guy was available. This deal, and what we gave up was quite a bit, but I was very clear I would not give up that unless it was not only the player, but a fit. Is it the loss of the other player? I guess, but that’s not what drives it, but this isn’t done unless it’s that type of player. If you’re thinking it’s, ‘well, we’re going to lose these guys so we’ve got to do something,’ no. You know how I feel about young players and things. It’s that fit with ideally those two guys, and that allows everyone else to really fit. I mean, if the team you’re looking at, it shouldn’t give the team any relief now. Keep comin’. That’s the idea. We’ll see. And I do think every player on the team just grew three inches and put on 10 pounds of muscle, so that doesn’t hurt.

On whether the priority is to sign Milan Lucic long-term:
I think it’s a big debate right now, right? The whole thing of windows and when you see what’s happening out there. Again, I think given the fit, it made sense to push the envelope. We were able to pull this off, and we need a backup goalie now, and we’re going to probably still end up with one forward space, but that’s pretty good considering the predicament we were in, to be able to improve the team and still have some space. We’ll see how that works out. You know what I think as far as this group. These guys like each other, and I think we’ve got an environment where guys want to stay and have a chance to win, so we’ll see how it works out. There are some preliminary projections on next year’s cap. But I have to say our first priority, in terms of signing now, is Kopitar. And the other thing I’d say about this that shows this team cares about winning, what Tyler Toffoli did, this again shows how everything ties together. With the threat of offer sheets and everything out there, the way Toffoli has handled his situation was exemplary in terms of team. This is a top young player. He could wait for an offer sheet. He could demand six million in a long-term deal and hold out and everything. We talked to him, and it’s certainly a fair deal and it’s still a good deal for him, but in no way did he say, ‘I’m going to hold anybody hostage,’ like you see going on out there. If Tyler Toffoli doesn’t step up and do this, we can’t do this deal, because then we would have exposed ourselves to an offer sheet. It’s just exemplary for a young player, to realize his time will come and take a good deal but not try and shoot for the moon, and then the team is allowed to go out and make itself better. Because that was the thing. Once this thing got rolling, it was not doable without Tyler signed, because I think if we had done this without Tyler signed, we were exposed to an offer sheet, because I think that’s now going to become more in vogue. It’s a great example of guys caring about the right things. They’ll get their money when the time comes.