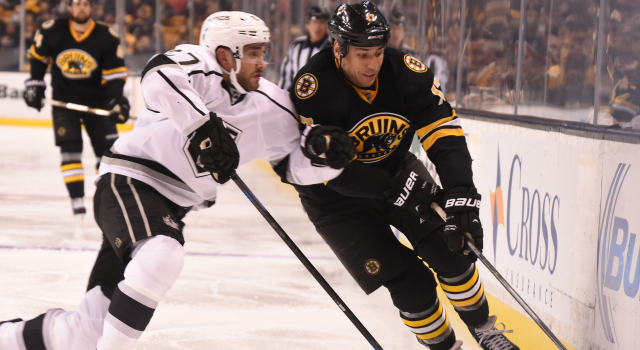 The trade is official; I’ve received the confirmation from hockey operations. Milan Lucic has joined the Kings in exchange for Martin Jones, defensive prospect Colin Miller and the 13th overall pick tonight.

The trade was worked out much quicker than most NHL trades; from what I’ve heard from hockey operations, the first calls weren’t exchanged until 11:30 p.m. last night.

This trade reinforces what LA Kings Insider had reported earlier in the summer: Mike Richards will not play for the Kings next season. Though Michael Futa referenced “opportunities” to trade Richards when we spoke earlier today, the most likely option is still a buyout. Should the Kings choose to buy Richards out, they would receive an additional $4.53M in salary cap space (5.75M cap hit – 1.22M 2015-16 buyout figure).

Though the Kings are still working with Andrej Sekera about a contract extension – – this trade likely signals the end of Justin Williams’ tenure with the Kings, who almost certainly won’t be able to afford the three-time Cup winner when the free agency period opens Wednesday.

Miller, a Calder Cup champion with Manchester in 2015 who won the hardest shot and fastest skater awards at the AHL’s All-Star Game this past year, was unlikely to make the Kings out of training camp but is certainly an intriguing prospect with second-pairing potential.

In 34 career games, Jones is 16-11-7 with a 1.99 goals-against average, a .923 save percentage and seven shutouts. He was due to become a restricted free agent on July 1; according to my contacts within hockey operations, negotiations did not exactly go expeditiously, which led to his name surfacing in trade talks.

I’ll have more from Rob Blake shortly; I’ve been told that the Kings are planning for an otherwise quiet night here in Sunrise. Lucic is also expected to join reporters on a conference call.

UPDATE, 6:40 p.m. ET: At this time, I’m getting the impression that re-signing Andrej Sekera will be very difficult, having spoken with Dean Lombardi. I’ll post quotes soon.