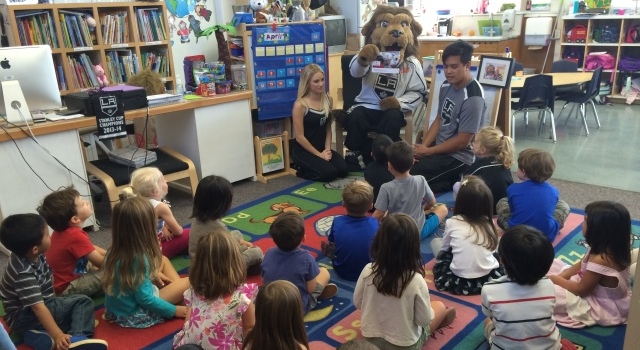 Parents of young children: With whom do you consult to encourage your kids to read? Teachers? Tutors? Ha! Incorrect. You turn to Bailey. Bailey is bringing his Story Time with the LA Kings on the road this summer, and if you live near any of the participating libraries below, you’ll be able to catch a special reading of Z is for Zamboni.

More information is available at LAKings.com/storytime, or by contacting Amanda Ellis with the Kings at aellis-at-lakings-dot-com.

Kind of related. When I worked in Everett, we had several guys who at the beginning of the season basically said, “We’ll do all the school visits this year,” and they were excellent in serving as community ambassadors and speaking at elementary schools and reading from children’s books. One of those guys was Landon Ferraro, who stuck with the Red Wings at the end of the season and won our community relations award in 2010-11. Similarly, it’s good to see Tyler Toffoli serving in that role; he was also the guest overseeing the opening of the Kings’ Discovery Cube exhibit, which came on a day off for the team late in the season.