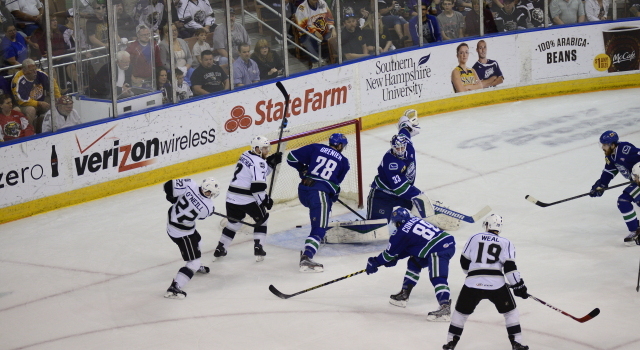 Regular Calder Cup coverage will continue tomorrow from Utica, New York, where the team arrived and unloaded its gear at the Utica Memorial Auditorium at 4:30 p.m. local time today.

Before tomorrow’s game day coverage commences, here’s a reminder of the stakes involved in this year’s Calder Cup. For the staff and fans of the Monarchs, these heightened and final AHL games elicit some complicated emotions.

It’s a bit too easy and perhaps a bit vague to consider the team’s current run “bittersweet.” The players are focused only on Game 3, Wednesday at the Utica Memorial Auditorium. But for the staff and fans of the team, there’s certainly the awareness that while there will be competitive hockey returning to Manchester in the fall, this current group won’t be returning.

“We got close, we had some good teams and things just didn’t work out, but we have a really good bunch of guys this year, and, as we talk now, we’re on our last road trip actually, and we go home after this. It’s certainly mixed emotions,” said Hubie McDonough, the Monarchs’ Director of Hockey Operations, a Manchester native and the all-time leading scorer at St. Anselm College, a small school located outside of the city center.

“Nobody really wanted to move, but you have to do what you have to do. So, we’re enjoying this now, enjoying this run we’ve had, and … [have] never made it this far, so it’s certainly a great accomplishment for all of the guys, all these young kids. It gives the Kings fans hope for the future because there are a lot of players here that can make that step.”