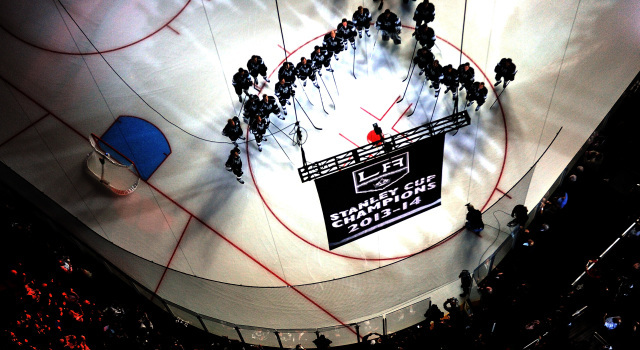 The Los Angeles Kings won the Sports Business Journal’s Sports Team of the Year award during a ceremony Wednesday night at the New York Marriott Marquis at Times Square. Luc Robitaille accepted the award on behalf of the organization.

Sports Team of the Year. pic.twitter.com/Shd8zkduSl

The award is presented to a team that exhibited “excellence, growth, creativity, innovation, sound planning, implementation and outcomes” between March 1, 2014 and February 28, 2015 and is judged by a panel of editors, writers and researchers from SportsBusiness Journal and SportsBusiness Daily. The Charlotte Hornets, Seattle Seahawks, St. Louis Cardinals, Team Penske and Los Angeles Galaxy were also finalists for the award, which has been won by the Golden State Warriors (2014), Oklahoma City Thunder (2013), Boston Bruins (2012), San Francisco Giants (2011), Seattle Sounders (2010), Boston Celtics (2009) and Boston Red Sox (2008).

I recently spoke with President, Business Operations Luc Robitaille and COO, AEG Sports Kelly Cheeseman about how the team’s business operations was successfully able to coherently articulate the organization’s rebuild last decade and capitalize on marketing and outreach opportunities that presented themselves during the team’s run to two Stanley Cups in three seasons. There are some interesting revelations about the team’s business structure and role specialization that led to greater off-ice success; to read my story from last week, Rebuilt, click here.

That the team’s hockey operations has established a culture of winning and expectations, and that the business operations has surrounded recent on-ice success with a sustainable business model is an illustration that the club’s commitment to an inside and out rebuild has passed – and its success is reflected in the two Stanley Cups and a Sports Team of the Year nomination.

“It’s incredible to me that the Lakers are losing this year and everybody in this town are saying it won’t take them long, they’ll come back. That’s their culture. That’s what everybody knows about them,” Robitaille said. “Our goal for us, the LA Kings, is that. We want everybody to believe our philosophy is we’re trying to be the best. Like Dean this summer, when we [missed the playoffs], we all know he’s devastated because he knows he wants to be the best.”

“We all know that since we lost, you can’t even reach him because he’s trying to make us better. He wants to get us right back to where we belong and that’s what we’re doing here. Everybody who works for the Kings is trying to do that.”

No, the @LAKings did not win another Stanley Cup. But they did win the next-best thing… #sbjsba pic.twitter.com/pNpkxRrONg