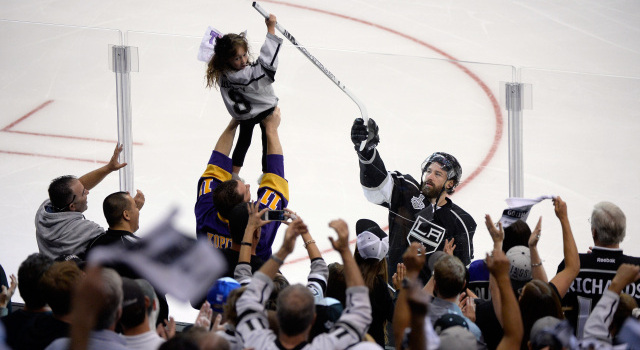 A good afternoon to you, Kings fans. Before I get to work on the Mike Richards evaluation, I just wanted to pass along my latest feature for LAKings.com, titled Rebuilt. The Kings will find out on May 20 whether they’ve been named as the Sports Business Journal’s Sports Team of the Year – other finalists include the Seattle Seahawks, St. Louis Cardinals, Charlotte Hornets, Team Penske and the Galaxy – and as a preview for the event, I spoke with President, Business Operations Luc Robitaille and COO, AEG Sports Kelly Cheeseman to share how the team was able to complete a successful overhaul of its business operations and practices as hockey operations undertook a similar venture.

By finding on-ice success, the team was able to satisfy the core fans that had remained ultra-loyal as the team experienced changeover in management, personnel and philosophy for much of its history.

“I remember one of the biggest things we used to say is, actually the NHL started it by saying, ‘let’s focus on our fans. Let’s make sure our fans understand what we’re doing,’” said Robitaille, who was appointed to his current position in 2007. “In those days, the team wasn’t great, but our fans have been the 16,600 plus the people who were watching on TV, wanted to make sure they understood Dean’s message which was going to be to ‘rebuild.’ That was very, very important because if they understood that and were willing to live with that, then we knew at some point it was going to turn around. You don’t know when and how it’s going to happen, but you knew at some point that was the goal.”

Some of the details may serve as a bit of a refresher for those who have paid attention to the Kings on and off the ice, but it’s an interesting look at how a hockey team ventures to be successful off the ice as the on-ice product improves.