Trevor Lewis and the United States (5-1-0-1 / W-OTW-OTL-L) defeated Slovakia (1-2-2-2) 5-4 in overtime on Tuesday to finish atop Group B of the World Championships and will remain in Ostrava to face Switzerland (2-0-4-1) in playoff round action Thursday at 6:15 a.m. PT. The game will be shown live on NBCSN. Lewis finished with an assist on Seth Jones’ first period goal and totaled one shot and an even rating in 18:39 of ice time. He screened Slovakian goaltender Julius Hudacek on Jack Eichel’s late overtime goal that clinched the group for the Americans. Slovakia had been eliminated when Belarus had defeated Norway and clinched a spot in the playoff round earlier in the day. Gaborik got the Slovakians on the board with an early second period deflection (viewable at 0:40 in the player below). He also assisted on an Adam Janosik goal that brought Slovakia within one, finishing with two points, three shots on goal and a minus-one rating in 17:30 of ice time.

In Prague, Canada out-shot Austria 46-15 during a 10-1 romp at O2 Arena. Jake Muzzin logged two assists and a plus-five rating over 17:59 of ice time, while Tyler Toffoli registered three shots on goal and a plus-one rating. The Canadians finished atop Group A having won all seven games in regulation and accumulating an impressive +35 goal differential. They’ll face Sergei and Andrei Kostitsyn and Belarus at 7:15 a.m. PT Thursday.

After Slovenia was relegated to Division I Group A, Matjaz Kopitar, Anze and Gasper’s father, resigned as the team’s head coach. Kopitar, who had coached the national team since 2010, guided Slovenia to two Division I gold medals at the World Championships and the club’s improbable seventh-place finish at the 2014 Winter Olympics.

A1 CANADA
B4 BELARUS

B2 FINLAND
A3 CZECH REPUBLIC

B1 UNITED STATES
A4 SWITZERLAND

A2 SWEDEN
B3 RUSSIA
-all quarterfinal games Thursday 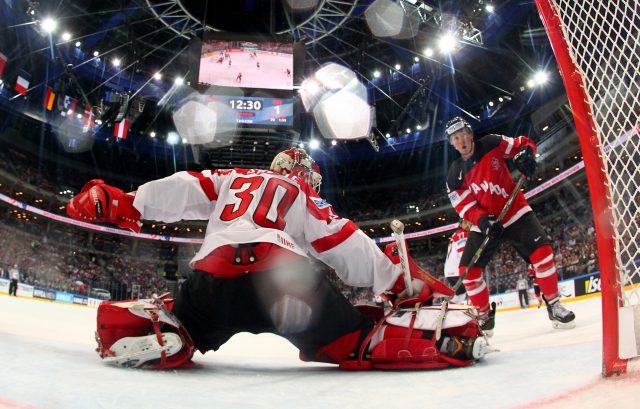