It wasn’t a banner day at the World Championships for current Kings, as Trevor Lewis and the United States fell to Belarus and Anze Kopitar and Slovenia were shut out by Finland. Ex-King Oscar Moller, however, scored twice and added two assists in Sweden’s 4-3 win over Germany.

Trevor Lewis provided a screen and assisted on Torey Krug’s power play goal that brought the Americans within two in the third period, but he was also off serving a slashing penalty when Alexei Kalyuzhny of KHL-Minsk scored on a centering deflection that ricocheted off Ben Smith and past Jack Campbell for an own goal. Lewis finished with one assist, three shots on goal and a plus-one rating in defeat.

Slovenia directed only 13 shots on goal and remained in the Group B cellar following a 4-0 defeat to Finland. Anze Kopitar skated to a team-high 18:10 of ice time but did not register a shot, and former Detroit Red Wing Jan Mursak was the only Slovenian to account for more than two shots. Pekka Rinne posted the shutout with three stops in the first, four in the second and six in the third.

The United States (3-0-0-1, 4th place Group B) will return to action against Denmark on Friday, while Slovenia (0-0-0-4, 8th place, Group B) faces a crucial game against Norway that will have a say in potential relegation to Division I, Group A. Denmark, with three losses and one overtime loss in the tournament, has one point. 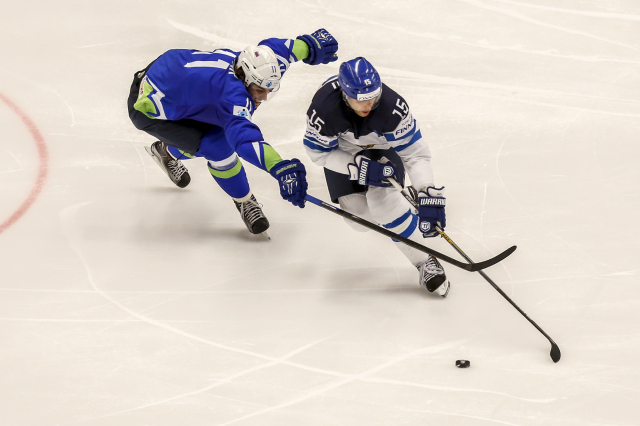