Canada came back from a 3-0 first period deficit in a 6-3 win over Sweden and Slovakia fell in a 3-2 upset to Norway during Wednesday’s games at the World Championships in the Czech Republic.

Slovakia’s loss isn’t as important for Gaborik and company as it is for Anze Kopitar and Slovenia, who had shared an 0-0-0-3 (W-OTW-OTL-L) record with Norway. With 0 points in three games, Slovenia is now in last place in Group B and will face a stiff relegation battle against both Norway (4 games, 3 points) and Denmark (4 games, 1 point). Each team plays seven games in the Preliminary Round before the Playoff Round and single elimination competition commences.

At the game in Ostrava, Marian Gaborik took three shots on goal and assisted on Tomas Surovy’s first period goal that opened the scoring. Slovakia led 2-0 through 25 minutes but allowed two second period goals before ceding the game-winner early in the third period to Mattias Nørstebø, who had totaled three goals and eight points in 41 games between SHL-Brynäs and Allsvenskan-Mora in 2014-15. The win was the first ever by Norway (1-0-0-3, 3 points) over Slovakia (1-2-0-1, 7 points) at the World Championships. Slovakia may also have to content with potential suspensions to Andrej Meszaros, who received a game misconduct for butt-ending, and Milan Bartovic, who received a game misconduct for checking to the head and neck area. Slovakia returns to action on Saturday against Finland, which trails closely in the Group B standings with six points through three games. IIHF RECAP | IIHF STATS

At the game in Prague, Mike Smith allowed first period goals to Anton Lander, Victor Rask and Filip Forsberg before Canada (4-0-0-0, 12 points) scored six times over the final 40 minutes in a 6-4 win over Sweden (2-1-0-1, 8 points). Martin Jones, who earned a win against Germany earlier in the Preliminary Round, never entered the game as Smith recovered to stop 17 of 18 shots over the final two periods. Jake Muzzin logged a minus-two rating and ranked third on Canada with 19:59 of ice time, while Tyler Toffoli took two shots and registered an even rating. Canada returns to action against France (1-0-0-2, 3 points) on Saturday. IIHF RECAP | IIHF STATS 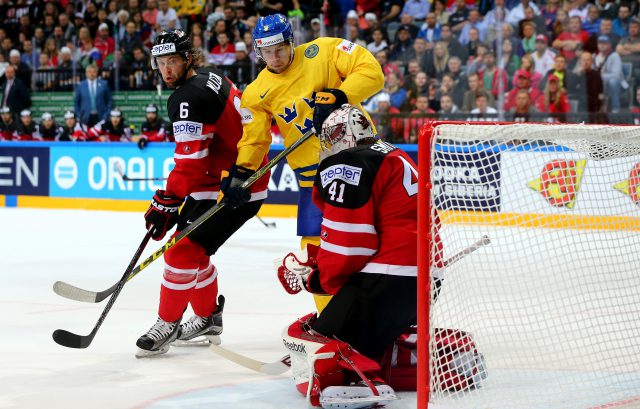 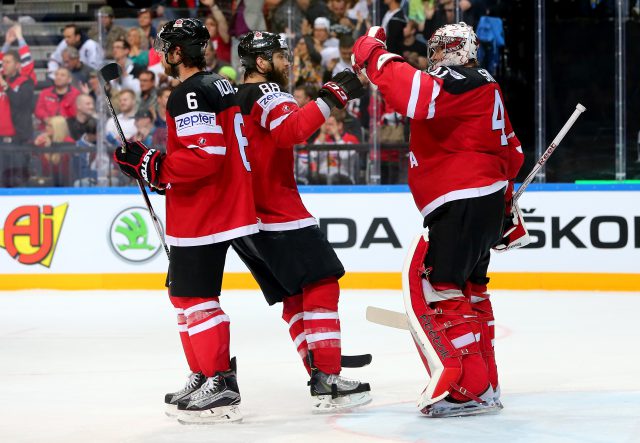 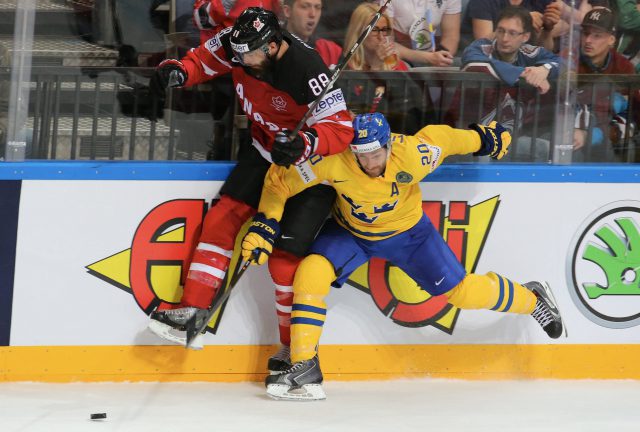