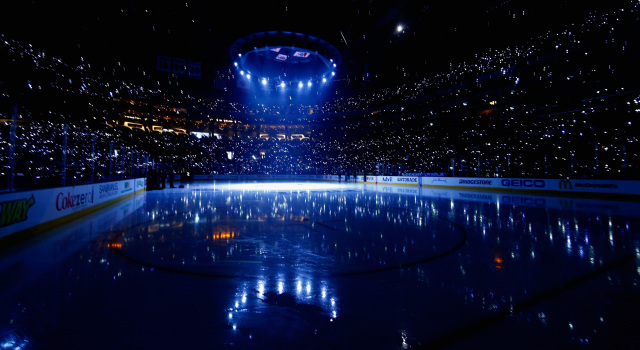 Slava Voynov and wife Marta Varlamova appeared in a Torrance courtroom on Monday during a pretrial hearing related to the league-suspended Kings defenseman’s arrest on a felony domestic violence charge. The hearing, which will continue Tuesday, will ultimately determine whether comments Varlamova made to a hospital social worker in an emergency room are admissible in court. Based on reports from Daily Breeze reporter Larry Altman and Orange County Register reporter Rich Hammond, the defense sought to deem such correspondence as “privileged” information, similar to correspondence between an individual and a lawyer.

Varlamova, who does not wish to testify and characterized the occurrence on the night of October 20 as an “accident,” agreed to take part in domestic violence counseling through the NHLPA “to help determine if she might change her mind,” according to Altman.

From the Daily Breeze:

Marta Varlamova made the decision following Judge Eric Taylor’s threat during a pretrial hearing to find her in contempt and fine her less than $1,000 if she refuses to answer questions when the case goes to trial in July or at any pretrial proceedings.

“I’d prefer not to find her in contempt if we can give her a chance to decide if she is willing to testify,” Taylor said, adding that the decision could have an impact on her immigration status.

Varlamova’s attorney, Michael Walsh, spoke with her briefly and told the judge she would accept counseling through the National Hockey League’s Player Association. No timetable was set this morning for when she would seek counseling.

Other reports, via Hammond and Altman:

-Voynov, who underwent surgery to repair a torn Achilles suffered recreationally, had his cast replaced with a soft boot and is “walking well,” via Hammond.

-Hospital employees indicated that they could understand Varlamova and were able to effectively communicate with her.

-Varlamova told security guard Ronnie Cornell Liston that Voynov had hit her. She told nurse Cassie Wong that Voynov had pushed her into the television stand, and that it “wasn’t the first time this has happened.” Via Altman, Wong said in testimony that Varlamova appeared “anxious” and avoided questions about the incident.

-Voynov never attempted to interfere, via reports, and appeared to be “sad” and “very concerned,” via Liston’s testimony.

Court is done for the day, re: Voynov. Judge made no definitive rulings today. Ton of talk, no decisions. Back tomorrow.