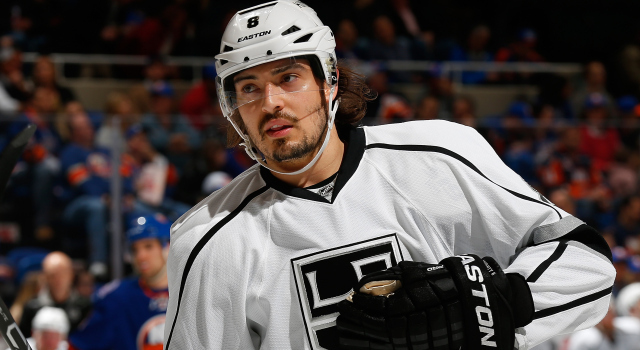 After Anze Kopitar was nominated for the Lady Byng and Selke trophies, the Kings’ chances of claiming a major league award grew on Monday as Drew Doughty was named as a finalist for the 2015 James Norris Memorial Trophy, awarded annually to the defenseman “who demonstrates throughout the season the greatest all-round ability in the position.” P.K. Subban of the Montreal Canadiens and Erik Karlsson of the Ottawa Senators were also announced as finalists of the trophy that will be presented to the winner on June 24 at the 2015 NHL Awards in Las Vegas.

Doughty, who finished in third place for the 2010 Norris Trophy after a 16-goal, 59-point season, was nominated for the second time in his career. Subban won the award in 2013, and Karlsson in 2012. Rob Blake, who was presented the trophy in 1998, is the only King to win the Norris.

The winner is determined by a vote amongst members of the Professional Hockey Writers’ Association in 10-7-5-3-1-tiered voting. Doughty finished in sixth place for the Norris one year ago.

Doughty’s inclusion is not a surprise. Having averaged 28:59 of ice time per game – four seconds behind league leader Ryan Suter and 1:44 ahead of Karlsson, who finished third in ice time – the right-handed shooter appeared in all 82 games, amassing seven goals, 46 points and a plus-three rating. More importantly, he continued to serve as a dynamic all-situations defenseman who absorbed additional minutes and maintained a high standard of play in the absence of Slava Voynov, another right-handed shot. He may have been strained by his immense usage late in the season, but given that Doughty is a two-time Stanley Cup winner who is viewed as amongst the most elite defensemen in the game, that he had only been a Norris finalist once before led many to expect that he’d be given greater consideration this season.

Doughty ranked fifth amongst defensemen with at least 25 games played with a 56.4% Corsi-for percentage in five-on-five play. His rate was above Karlsson’s (52.8%) and Subban’s (52.1%), though Los Angeles collectively was a much stronger possession team Ottawa or Montreal.

That Doughty experienced a career-low shooting percentage of 3.2% on a career-high 219 shots on goal suggests that the now-25-year-old got more pucks through in 2014-15 and could be ticketed for an increase of his seven goals next season.

Calgary’s Mark Giordano, who totaled 11 goals and 48 points in 61 games before suffering a torn biceps, was a leading contender for the trophy prior to his injury.

The NHL’s caption:
Doughty anchored a Los Angeles defense that finished in the top 10 in the NHL in goals against for the sixth consecutive season. He played in all 82 games for the second time in his career (also 2009-10), pacing the League in total time on ice (2,377:40) and ranking second in average time on ice (28:59). Doughty also posted 7-39—46, his second-best offensive season behind 2009-10 (16-43—59), and led the NHL in a number of enhanced statistics categories, including the team puck possession metric SAT (shot attempts differential) – the Kings registered 410 more shot attempts than they allowed with him on the ice at 5-on-5. Doughty is a Norris Trophy finalist for the second time after finishing third in voting in 2009-10.