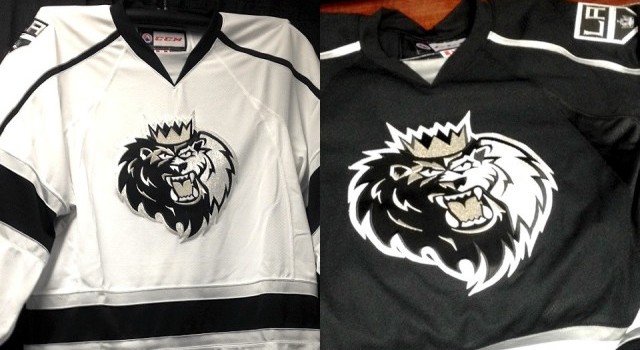 Francis Wathier scored with 2.9 seconds remaining during a flurry of action in front of goaltender J.F. Berube, and the Portland Pirates extended their Eastern Conference Quarterfinal series with a narrow, 3-2 Game 3 win over the Manchester Monarchs Sunday evening at the Cross Insurance Arena in Portland, ME. The Monarchs now lead the best-of-five series two games to one and will contend with a break in the schedule in advance of Game 4 Thursday night in Portland.

Michael Mersch and Jordan Weal again found their way into the box score with goals for Manchester in a game that experienced significant momentum swings and pitted J.F. Berube against Louis Domingue in an entertaining goaltending battle. Mersch’s goal was a late first period equalizer that came on a five-on-three power play when he buried a loose puck after Colin Miller had broken his stick on a shot attempt. Weal’s goal put Manchester ahead 2-1 in the second period as he joined a three-on-two rush as a fourth skater and lifted an odd-angle Sean Backman shot over Domingue’s shoulder. Former Oswego State Laker Eric Selleck scored late in the second period to tie the game at two, while Phil Lane opened the scoring on a first period deflection.

-Adrian Kempe remained in the lineup while Josh Gratton and Kevin Raine entered for Andrew Crescenzi (who was hit with a one-game suspension for his boarding major and game misconduct in Game 2) and Paul Bissonnette as Manchester opted to move Kevin Raine up front and use a fourth line of Gratton-Horvat-Raine.

-There was a lot of special teams time in this game – Manchester was 1-for-7 on the power play – so Adrian Kempe’s usage was a touch restricted. This was the first time I had seen him in a game setting and away from rapid fire highlights, and from a quick, preliminary observation, he could skate well and appeared to cover a lot of ice on the forecheck. He was denied on a high quality first period opportunity when Domingue made one of his better saves on his backhanded rebound attempt after he had opened the rush with an outlet pass from Manchester’s defensive zone.

-Colin Miller really wasn’t afraid to pull the trigger while in the offensive zone, but one of his most impressive plays was his ability to keep a bouncing puck in at the right point despite stiff pressure from Portland forwards looking to force the puck out. He won a puck battle that immediately resulted in a late-developing three-on-one ending with Domingue’s denial of a Grade-A Shore-to-O’Neill set-up.

-On the injury front, Manchester appeared to have gotten through this game without any casualties, though Brian O’Neill took a heavy hit from behind along the boards from Brandon Gormley that resulted in a two-minute boarding minor in the first period. Midway through the second, Jordan Weal appeared to block a shot in his lower leg (as surmised by the Portland broadcast; no replays were available), and as athletic trainer Michael Muir and a teammate appeared to help him skate back to the bench, Weal shook off the offers of assistance and tried to skate the pain off himself. He did not leave the game.

-I watched the game through AHL Live, and because the Portland broadcast was synchronized better with the video, I listened to the home team’s call of the game instead of Ken Cail and Chris Ryan’s. In addition to reminding listeners of Selleck’s Oswego State connection, Portland’s voice also said that [what appeared to be] a Josh Gratton slash on the faceoff that followed the late game-winning goal was “typical of the classlessness of this Manchester team.” Whoa, slow down there, Nelly. 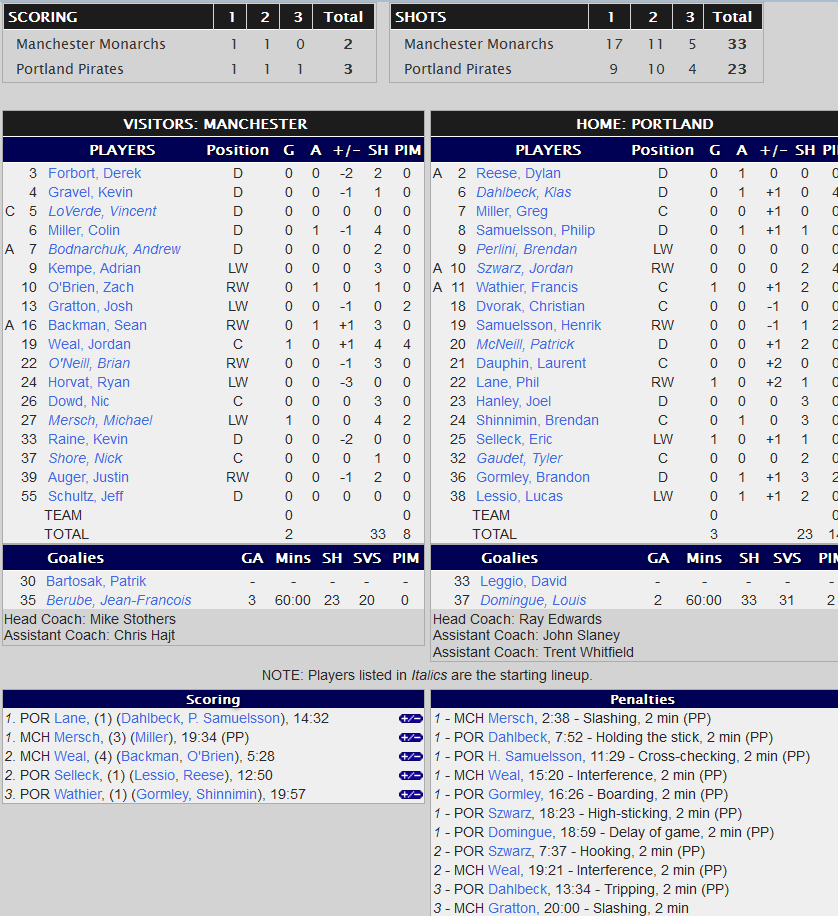