Notes and quotes from Manchester 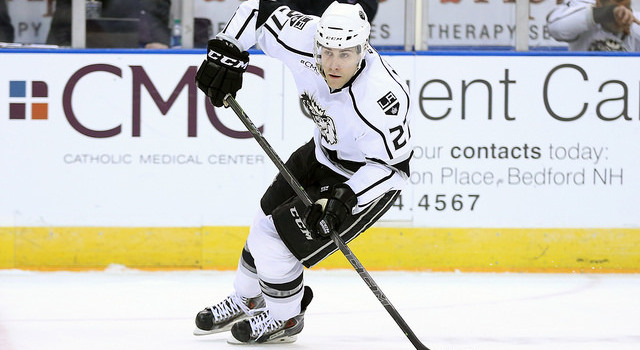 Having spoken to Kings Senior Advisor/Development Coach Mike O’Connell and having received audio and notes from Manchester (a stick tap to medial relations guru Dan Ventresca) earlier today, here are several additional Monarchs notes from in between games one and two of the club’s first round playoff series against the Portland Pirates, Arizona’s top affiliate:

-Michael Mersch skated with Nick Shore and Brian O’Neill last night and earned an assist along with a plus-two rating. While Jordan Weal and O’Neill scored two goals, Mersch’s performance continued to underscore his development as a professional throughout a 22-year-old rookie season in which he really came on strong late to ultimately post 22 goals, 45 points and a plus-20 rating. “I think it’s part of what you said, the ‘progression,’” said Mike O’Connell, Senior Advisor/Development Coach. “But he has also made a concerted effort to get to the net. I mean, really, that’s what he does. He gets to the net and provides a netfront presence which you hear every coach talk about. He does it every shift. When someone needs to get to the net, he gets to the net, and that’s where he thrives. He’s good along the wall, he’s good in the hard areas. He dedicated himself to that and it’s paying off.”

-Josh Gratton and David Van der Gulik both left the game due to injury. Gratton returned, but there is still some uncertainty over their availability for Game 2. Jeff Schultz didn’t play in Game 1, though I’ve been told by hockey operations that he’s “close.” Both Mike Stothers (through audio supplied by the Monarchs) and hockey operations said that it’s possible that Adrian Kempe could be an option if needed due to the forwards’ injuries, but more will be known about Gratton and Van der Gulik in advance of Saturday night’s game.

-When Jordan Weal scored his second goal, he became the first Monarchs player to tally multiple goals in a playoff game since Linden Vey also had two goals in Game 4 of the 2013 Eastern Conference Quarterfinals against Springfield. Weal and Brian O’Neill became the first pair of Manchester teammates to score multiple goals in the same playoff game since Game 5 of the 2006 Atlantic Division Semifinal against Hartford when Alexandre Daigle (2 goals, 2 assists) and Noah Clarke (2 goals, 2 assists) did so. Weal’s two goals were his first goals in nine career playoff games. “He just generates a lot of chances for not only himself, but for others, and they went in for him last night,” O’Connell said.

-Vincent LoVerde had an empty-net goal and two assists, becoming the first Monarchs player with at least three points in a playoff game since Linden Vey (2 goals, assist) in Game 2 of the 2012 Eastern Conference Quarterfinals.

-Nick Shore returned to Manchester and recorded an assist to go along with his plus-three rating. O’Connell’s depiction of Shore’s play: “Excellent. He was excellent last night. I mean we’ve got two guys, they go back-to-back, it’s a tough combination with Shore followed by Weal, or Weal followed by Shore and then Dowd. It’s pretty good. They’re both able to score, Shore and Weal, and they make players around them better. So it’s a really good one-two punch and you have to have that in any league, and we have it down here.”

Mike Stothers, on how he feels after winning the first game of the playoffs:
Alright. [Reporter: Just alright?] Yeah, it’s one game. So it’s alright.

Stothers, on the performances of Jordan Weal and Brian O’Neill:
You hope that your guys step up their game and they did. You know what? There are going to be other nights where maybe they’re shut down or they’re not going to be as hot and someone else is going to have to do it. We’re certainly not going to rely on two guys, but it was nice to see that they got on the board in the first game.

Stothers, on the injuries to David Van der Gulik and Josh Gratton:
We’ll see how they are in the morning. I mean Gratts came back to play. I’m anticipating that there won’t be any further delay on that. Only time will tell.

Stothers, on Vincent LoVerde “facilitating” and his overall performance:
First of all, I’m trying to understand the word ‘facilitated.’ I’ve never had a reporter ask me about ‘facilitating.’ I like that, that’s good though. You know what? Vinny was good. He got to play on Sunday and got himself comfortable and his timing back. I think that was important for us. I think you saw when we got [Andrew Bodnarchuck] and Vinny back together, we spend less time in our end and they’re very good at head-manning the puck and getting it to the guys. That’s the defenseman’s job. Get it in the hands of our forwards, that’s what we want.

Stothers, on whether it was tough not having Jeff Schultz in the lineup:
Well, I mean Schultzy is a huge part of our power play. [Laughs] He’s a huge part of our team. Schutlzy means a lot to us. He’s a good veteran guys and he’s been through the wars both in the NHL and the AHL. It’s a hard guy to replace, but a guy like Kevin Raine goes in and did a real nice job for us.

Stothers, on how he felt with the lead heading into the third period:
Alright. [Reporter: Just alright?] Yeah.

Stothers, on holding Portland to 16 shots:
I’m using the term ‘alright.’ It wasn’t a great game on either side. I think you can expect both teams to play better. I think there was a little bit of a feeling out process. The playoffs are the start of a new season and we have played each other a lot. I think it was a little bit of, I don’t want to say a chess match but I think both teams will be better on Saturday. I really do.

Stothers, on the playoff experience for players like Kempe and Lintuniemi:
Well, I mean it’s great for them but it’s important for all the guys. We’ve got a lot of guys, it’s their first year – Auger, Mersch, Raine, Ebert, I know I’m leaving guys out. They’ve been with us all season long. So it’s important to them and it’s important that they all get some playoff experience. Whether they’re playing or not, the environment we’re in makes it valuable for all of them.

Paul Bissonnette, on getting a win in the first playoff game:
I thought it started out pretty intense. It kind of lulled off a little bit there for a playoff game. I think we were just kind of trying to manage the clock and we had a couple guys go down on the left side, so we were just trying to manage the puck and kind of eat clock. As far as entertainment value, I don’t know what you guys got out of it, but it was good for us.

Bissonnette, on how he’s seen some of the young players progress:
Especially for a team that kind of just develops the young guys, we don’t have a crazy amount of vets. Especially up front, you look at the way Mersch has developed. Auger, from when I got here, is light years ahead of where he was. That’s [reinforcing through] video and I guess being hard on guys and making them accountable, but putting them back in those situations that they’re going to be in in the future. They’ve done well with it and those guys are contributing big time.

Bissonnette, on whether there’s incentive to win in Manchester’s final AHL season:
Yeah, we’ve had a good year all around and we lost some bodies up to the NHL and to injuries and we’re fortunate enough to have gotten those guys back. I think we all take a lot of pride in our game and I think winning and for a coaching staff that we really enjoy, it’d be kind of nice to end on that note for sure.

Bissonnette, on whether it feels good to be in some playoff games:
Especially for how well we were doing in the season, I don’t think it could come soon enough. The last weekend was kind of like ‘Let’s get this thing going.’ Personally, it’s great. Like I said, it was just kind of a weird game to get into it with a lot of special teams and, like I said, trying to eat clock, manage the puck and win games.

Bissonnette, on how much relocation talk affects players:
When it was in Phoenix, we did a really good job of managing it, especially for a team that didn’t have much money to go out and sign big free agents. Just internally, we had really good leadership. We had Bryzgalov and then we got Smitty back. It just kind of helped us make runs and internally we just held each other accountable and it was awesome. I would say it didn’t really affect us until the last season and then when we finally figured out we were staying, it was a relief. But all-in-all, the way the organization dealt with it and the uncertainty was really well. [Reporter: Does it come up here or is it just business?] No, because at least we know where we’re going, as in Phoenix, guys didn’t know where they were going to have to move their families under contract. A guy like Shane Doan – is he going to move to Winnipeg or to wherever they move the team? He’s got his family roots there. I’m sure going from Phoenix to Winnipeg wouldn’t be the best thing.

Bissonnette, on whether he’s fine with being in Ontario if he doesn’t play in the NHL:
Yeah, I’m obviously a borderline guy, and if I ended up in the American League, I love playing for Stuts. He’s hardnosed and, like I said, he’ll like yell at guys but he won’t demoralize them in the fact that he’s going to sit them. He’s going to call you out and put you back in that situation. He does it because he wants us to succeed.