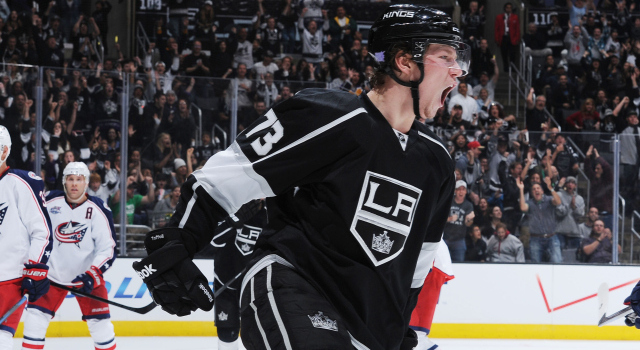 The Los Angeles Kings are facing a salary cap crunch. Already they’ve committed upwards of $64 million dollars to 17 players for next season, and it’s possible that the 2015-16 salary cap won’t rise past this year’s $69-million – and could potentially drop – should the NHLPA vote not to kick in a five percent salary cap escalator.

Apologies for sounding repetitive to those who have been following this story from the beginning of the 2014-15 season (and can more or less recite these salary cap reports by memory), but the Kings will need to negotiate new contracts with restricted free agents in Tyler Toffoli, Martin Jones, Andy Andreoff and Nick Shore while considering re-upping unrestricted free agents Andrej Sekera, Jarret Stoll, Justin Williams and Jamie McBain. The elephant in the room, of course, would be the upcoming negotiations with Anze Kopitar. Kopitar, whose current seven-year, $46.7M contract expires after the 2015-16 season, is eligible to sign a new contract on July 1.

Kopitar said on Monday that the two sides have not yet opened up negotiations.

“Well, obviously I’d like to stay here,” he said. “I think being here is very special for me. It’s a special place. But … we haven’t started talking yet or anything. In an ideal world, yeah, I’d like to get it done as quick as I can. We’ll see when the two parties come together and we’ll see how that pans out.”

As for more immediate concerns, Toffoli’s contract will be the most challenging to hammer out amongst the restricted free agents. In speaking with hockey operations late in the season, there was continued optimism that Tanner Pearson (who has already signed an extension), Jones (who is likely the next RFA to sign), Andreoff and Shore would all be re-upped with minimal stress. Toffoli, on the other hand, could take a little while longer.

In 76 games, the 22-year-old Toffoli totaled 23 goals and 49 points while leading the club with a plus-25 rating. He led the NHL with five shorthanded goals and turns 23 on April 24.

“The goal with Toffoli is to sign him, but the most important thing is for him to continue like this and not fall into that trap that, whatever his contract is, either flat lines or whatever,” Dean Lombardi said. “We have not had very good success with kids coming out of entry level [contracts] who have had some success and get the ticket. So it’s a Catch-22.”

There have been those in the organization who saw some stunting in the upward trajectory of both Slava Voynov and Jake Muzzin after the two signed their first lucrative contract extensions with the club.

“On the other hand, that’s probably human nature to be given [lots of money],” Dean Lombardi said. “You’re set for life. There is a little period there where that’s a dramatic change for a young person. I don’t care what line of work you’re in.”

Voynov eventually went on to play 119 pre-season, regular season, playoff and Olympic games and ultimately turned in an acceptable 2013-14 season that ended with a Stanley Cup, while Muzzin emerged from early 2014-15 hiccups to post career highs in goals and points, even if his play was occasionally uneven as he recovered from an early season injury and adapted to being used by over three and a half additional minutes of ice time per night against top competition.

With Toffoli headed for his first lucrative contract, the Kings aren’t deeply concerned over how it could affect his approach to the game, but mostly cognizant that there is a tendency for young players to believe they’re working as hard as they possibly can in and out of season when there is often another level of preparation and conditioning that can be reached.

“The only thing they now is with those guys in there like that, so many of them have been through it – Martinez and Voynov and Kopitar,” Lombardi said. “Now you’ve got a support group in there saying, ‘come on.’ Again, now we’re back to the original garbage can point, another way for the players who take over the room and make sure this happens, pushing each other.”

“You want to get to the point where Tyler walks in that room and goes ‘holy smokes, look at Kopitar and Doughty, I better get freaking going here.’ That was the whole Detroit thing, right? Why is it considered that Detroit is probably the best conditioned team in the league? Most people consider it. It started with Lidstrom and Yzerman in the top, it got handed down to Datsyuk. Again, you don’t have to get called into Dean’s office or have trash cans all over because it’s coming from within the room, the peer pressure.”